Trump Wants You to Know He's More Popular than 'The Bachelor'

may have been at the Grammys to support his wife — who hosted this year’s appropriately toned-down affair — but it was the hip-hop producer’s son (and Keys’ stepson) who took social media by storm.

Nineteen-year-old Prince Nasir Dean (Beatz’ legal name is Kasseem Dean), got the comic book character, Skeletor, trending on Twitter and drew curious onlookers at the Staples Center after attending the Grammys in full-on skeleton makeup. The aspiring DJ and producer, who performs as his artist alter-ego, Note Marcato, set in a motion an online game “Guess Who?” as social media sleuths worked to figure out the masked man’s identity.

Give this skeleton his Grammy. pic.twitter.com/0uyRfHypbN

While Beatz says he was surprised by the attention his son’s makeup received (“The amount phone calls and people hitting me up about him was crazy,” he tells Rolling Stone), the producer says he’s proud that Dean stayed true to himself.

“I thought he was super brave,” Beatz explains, prior to Marcato’s performance at Deluxx Fluxx, a one-night art exhibit and party for Marriott Bonvoy and American Express card members that took over the West Hollywood EDITION Hotel Saturday night. “One thing that we do in the household is we let our kids express themselves, and he just showed up as his character, Note Mercato, and I was like, ‘You know we’re going to the Grammys right?’ And he’s like, ‘Mm hmm, I’m going like this.’”

“You know,” Beatz concludes, “I thought it really worked for him.” 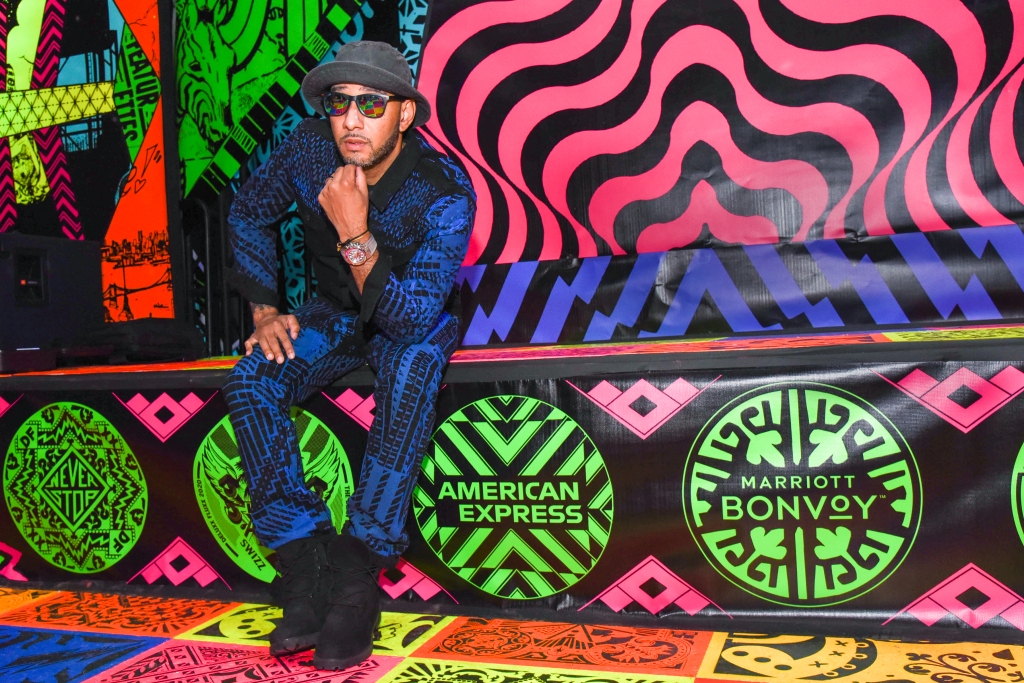 Beatz served as the curator and guest DJ for Saturday night’s event, which was put on in conjunction with the Dean Collection, the contemporary art and cultural platform he co-founded with Keys in 2014. As an avid art collector — Beatz has been collecting art for more than two decades and has reportedly amassed more than one thousand pieces from artists as wide-ranging as Kehinde Wiley and KAWS — the producer says it was important for him to bring art to the masses, through free events like Deluxx Fluxx, which brought to life characters created by the Brooklyn-based artist duo, FAILE, in a hyper-immersive, rave-like dance party.

The same freedom expression is what the 41-year-old hopes to instill in his kids. “We need to stop making people be what we want them to be, instead just letting them be who they want to be,” he says, “and that is the biggest lesson I’ve learned.”

“If my son] wants to wear his makeup and his costume and he’s being respectful, then I’m all for it,” Beatz says. “I give him the space to have his own sound, his own style, his own everything. I’m here to love him anyway.”

As for how Keys, his wife nearly 10 years, handled a contentious Grammys show, Beatz calls the 15-time Grammy winner, the “People’s Champ.”

“Even when the bad news came, she didn’t panic,” he explains. “She was extremely hurt, but the thing was like, ‘OK, how do we make everybody in the world feel hugged at this horrible time?’ It turned the show] into something that was heavy, but her family was there, our kids were there, and she did it. She took the whole world on her shoulders and helped maintain a sense calm in the storm.”

Fountains of Wayne's Adam Schlesinger Dead at 52 From Coronavirus

'In My Room' With Nathaniel Rateliff

Troye Sivan Returns Earlier Than Planned With 'Take Yourself Home'

Can DaBaby Save The Movie Industry With His New Short Film?

Tekashi 6ix9ine Could Be Released From Prison Today