There is a saying that goes “bad news comes in threes” and the rap community is experiencing the adage firsthand.

According to sources, rap veteran Shock G of Digital Underground has passed away following the tragic death of DMX on April 9th and Black Rob on April 17th.

So far, a cause of death has not been revealed, but a source close to Shock confirmed the news to AllHipHop.com, as did a founding member of the Digital Underground collective.

“34 years ago almost to the day we had a wild idea we can be a hip hop band and take on the world through it all the dream became a reality and the reality became a nightmare for some,” said Digital Underground co-founder, Chopmaster J. “And now he’s awaken from the fame long live shock G Aka Humpty Hump and Rest In Peace my Brotha Greg Jacobs!!!”

The rapper/keyboardist, born Gregory Jacobs, was responsible for a number of influential singles from Digital Underground’s  “Doowutchyalike,” to the group’s smash hit single, “The Humpty Dance,” as his alter ego Humpty Hump.

“The Humpty Dance” hit #1 on Billboard’s Rap Singles chart shortly after the single was released by Tommy Boy Records in early 1990, on their breakthrough album Sex Packets. The catchy tune, and bassline from the song has been sampled by hundreds of artists, ranging from Will Smith and LL Cool J, to Public Enemy and R&B group TLC.

“Our cash cow was Humpty,” Shock G told the Indy Star before a performance in at the Indiana State Fair in 2015. “But behind the scenes, all we did all day on the bus was watch Malcolm X tapes. We’re in that zone of Stokely Carmichael/Kwame Toure. So we were excited about Pac. He was the outlet that (record label) Tommy Boy didn’t allow us.”

Shock G was also instrumental in the development of Tupac Shakur’s career. Shock G introduced Pac to the world on the group’s#### single “Same Song.”

Shock G was also the producer, and featured on Tupac’s breakthrough single “I Get Around,” from the album Strictly 4 My N.I.G.G.A.Z

Additionally, Shock G produced Tupac’s classic track “So Many Tears” from his album Me Against The World.

This is a breaking news story and AllHipHop will provide more information as it comes in. Twitter is being flooded with condolences:

Young Guru
@Young_Guru
I’m saying too many of these back to back RIP Shock G!!!

Drunken Film Fest Oakland
@DFFOakland
rest in power shock g, an inspiration to so many 😭 https://t.co/pWkoX08ZRu 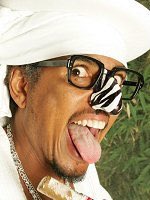 Statik Selektah
@StatikSelekt
It don’t stop. Smh. Rest In Peace Shock G aka Humpty Hump aka a huge reason the world ever got 2pac. Too many classics. #digitalunderground https://t.co/5rUJFhluWi