(AllHipHop News) It is highly doubtful anyone would have predicted at the beginning of the week a huge debate would be taking place on social media about an 8-year-old Usher Raymond IV song. However, that is exactly what has happened over the last few days.

It all began when Abel "The Weeknd” Tesfaye did an interview with Variety where he claimed Usher’s “Climax'' was inspired by the 2011 project House of Balloons. The Weeknd said, “I heard ‘Climax,’ that [2012] Usher song, and was like, ‘Holy f*ck, that’s a Weeknd song.’”

Now several producers and songwriters involved in the making of “Climax” have taken to social media to share their opinions on the subject. Thomas Wesley "Diplo" Pentz had a different recollection of the track’s creation than Ariel Rechtshaid and Sean "Elijah Blake/Red Stylz" Fenton.

the production on Climax lends itself to House of Balloons era @theweeknd. when I heard those early records they blew my mind – soulful in their silences, and a spacey iconic voice that felt uniquely internet. the idea of R&B having dark edges was what I wanted to bring to @usher. one of my favorite voices of all time. I'm glad @usher, Ariel, Eric, and I all got together to make that epic song. I remember I had the title of the song before I had the beat. It was conceptual from the beginning. It was a song that always had a crescendo but never felt like it reached the peak. kind of like some relationships never make it to where you want them but for a moment it could feel like ecstasy.

That statement got a reaction from The Weeknd who tweeted:

Of course media blows things out of proportion and takes things out of context. Usher is a King and always an inspiration so it was flattering to hear what him and Diplo did on climax. XO

Rechtshaid replied to Diplo by posting:

love @EricBellinger but we made this one w @SirElijahBlake 🙃…i tweet this with the utmost respect to all parties involved. climax was inspired in the room without any subconscious or conscious outside influence… no doubt. just saying it wasn’t part of our process that night❤️.

Blake responded to Diplo and Rechtshaid with quote-tweets that read:

Bro who is tweeting from your account? Lol cause you just said Eric who is also my bro and did several on the album but wasn’t even in NY when we did that record😂😂😂… It’s definitely all love to ALL my bros! I’m starting to think Abel is tweeting from Wes account though😂😂😂.

Usher appeared to offer his own subliminal response to the "Climax"/House of Balloons conversation by tweeting:

Have you ever seen the moon bark back at the dog? 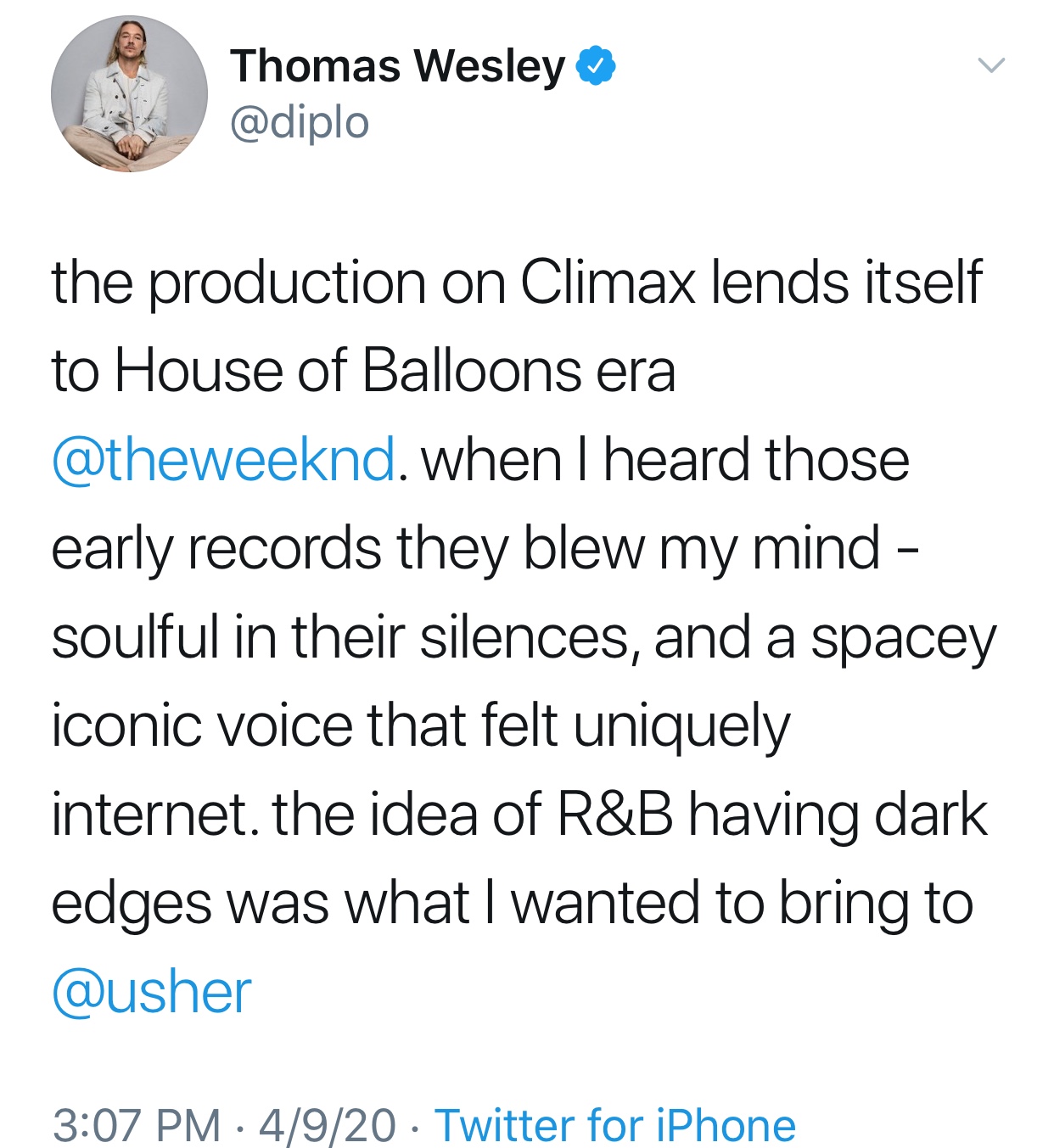 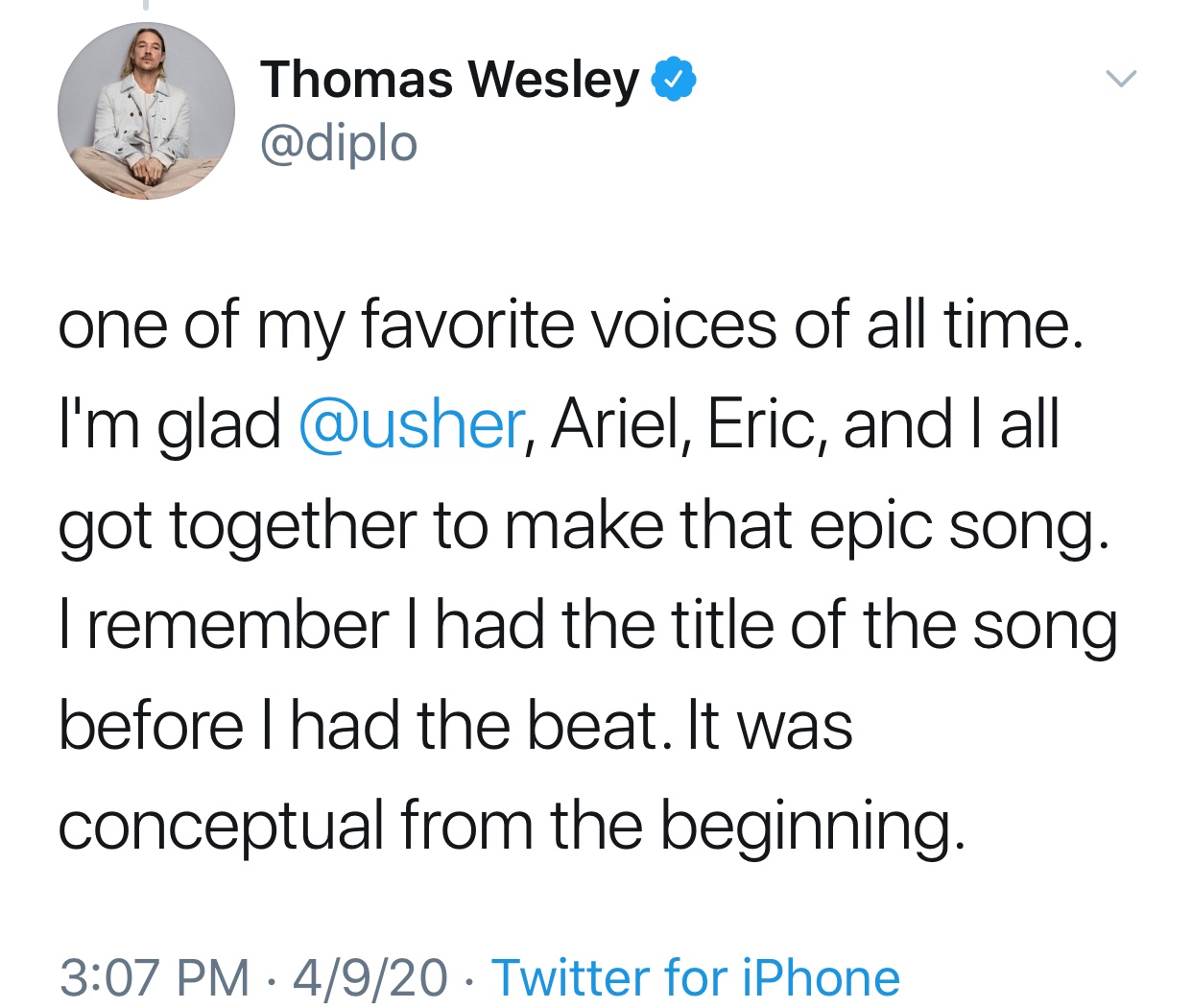 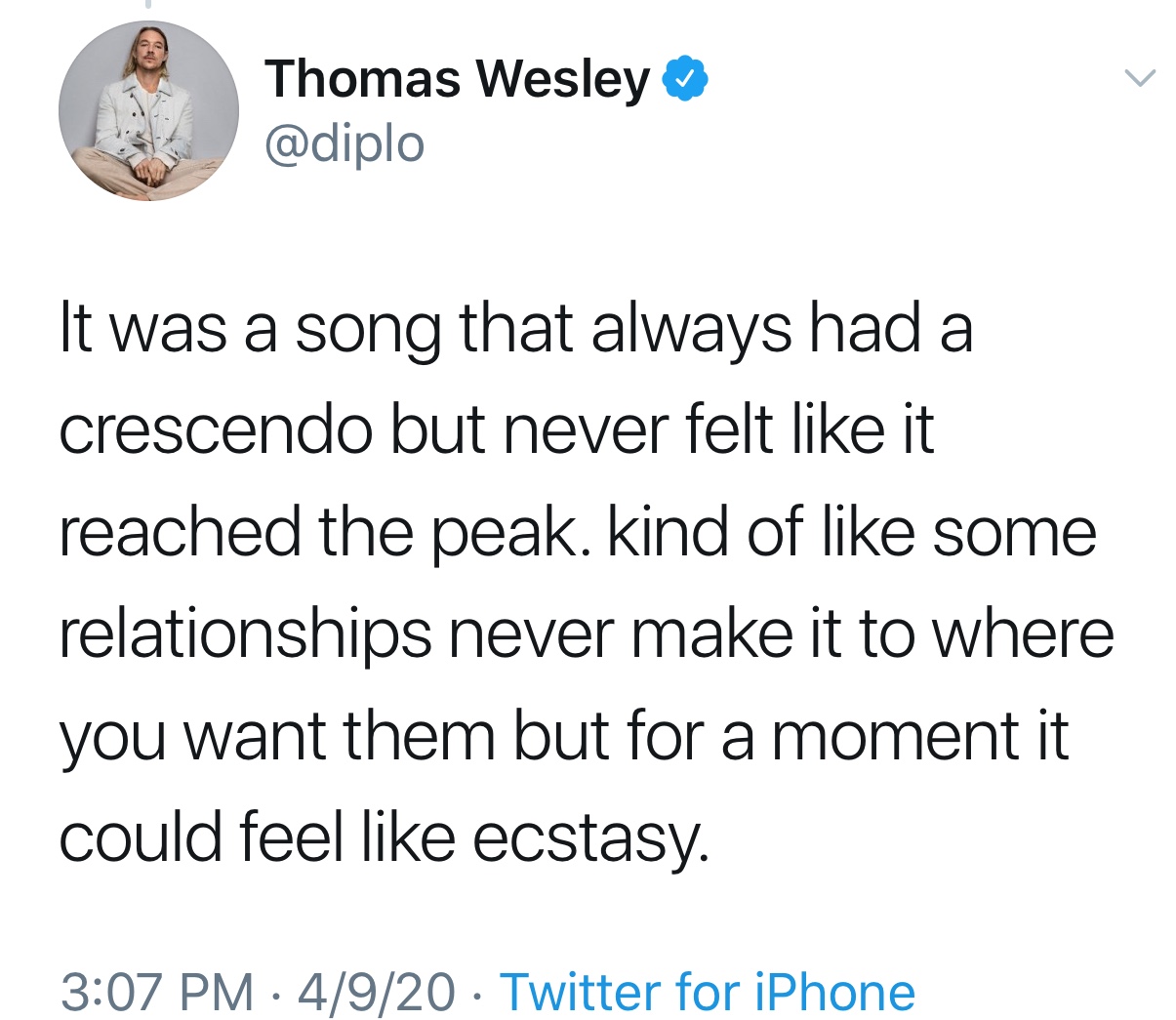 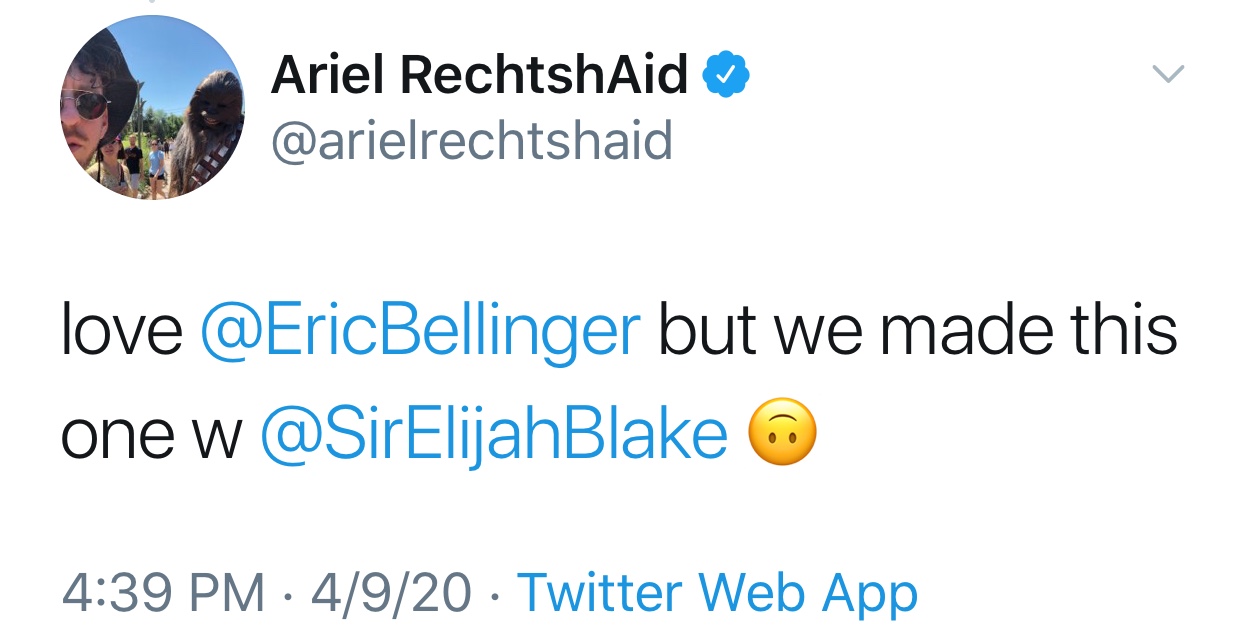 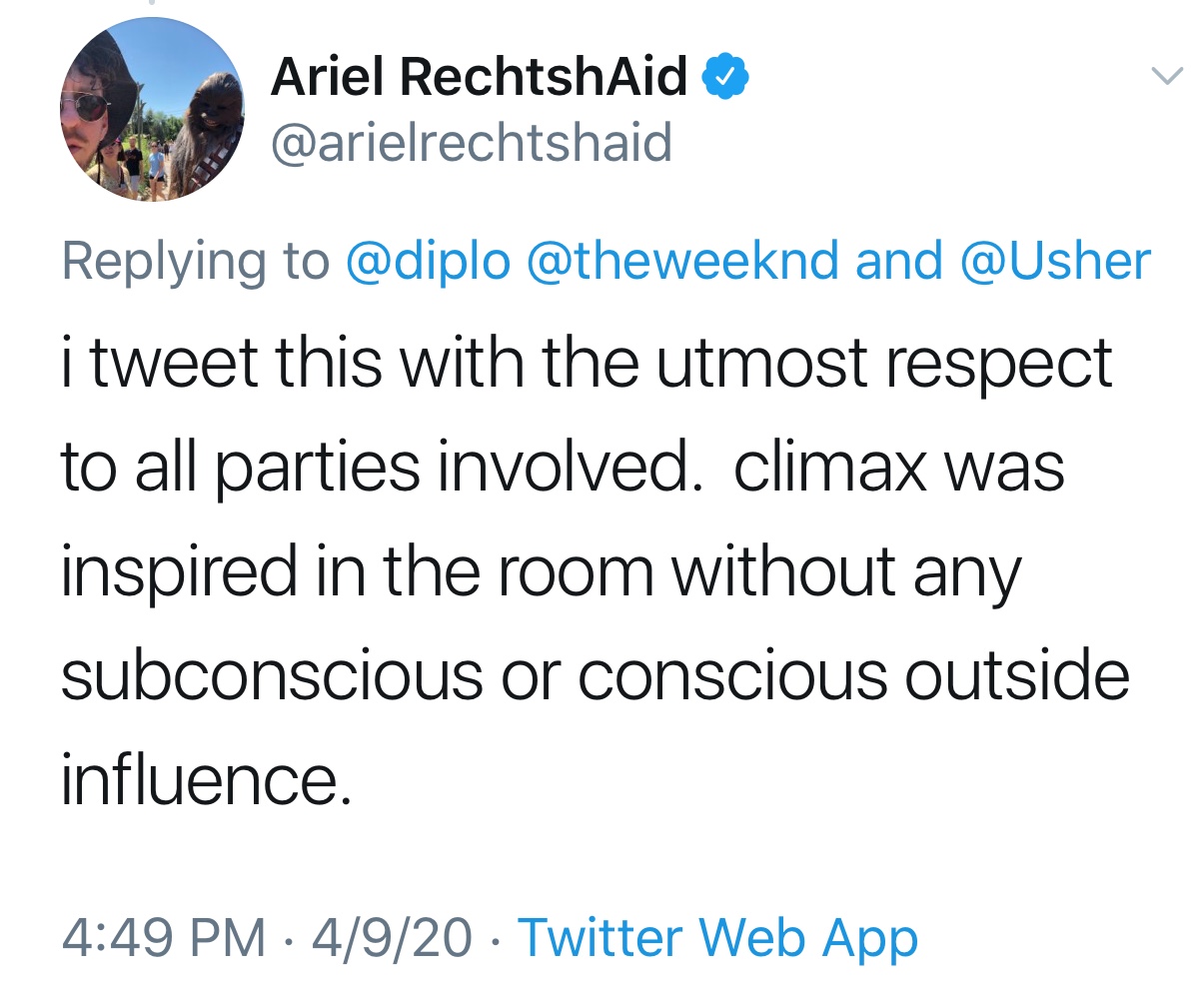 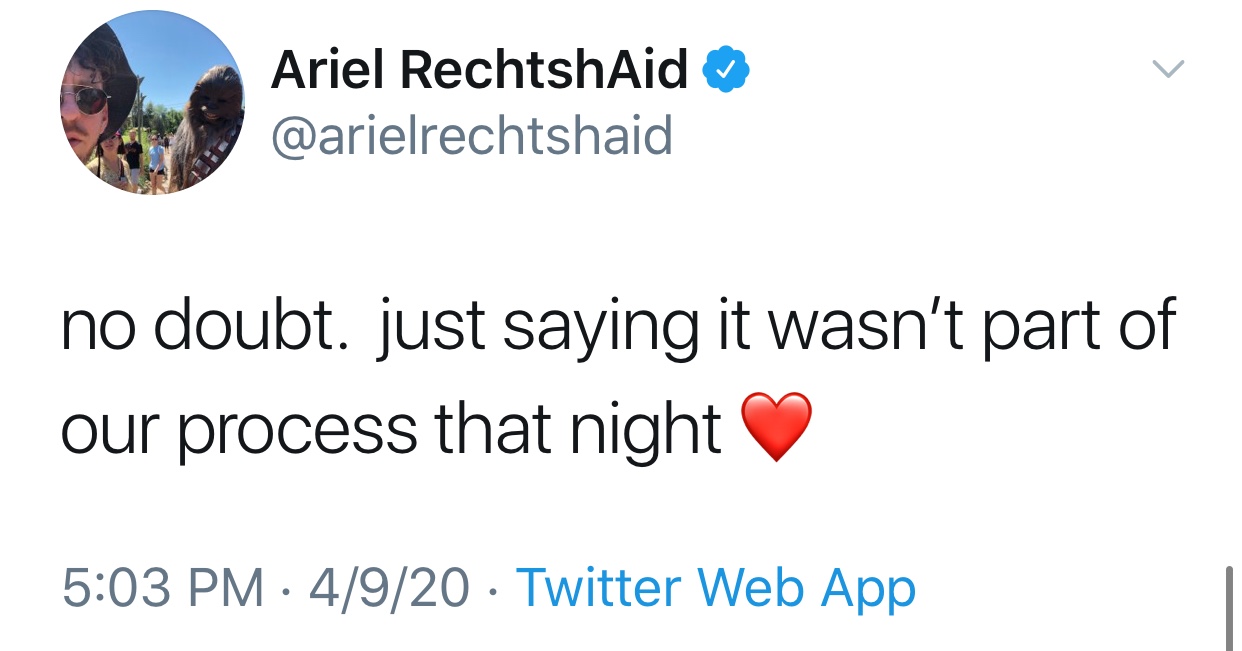 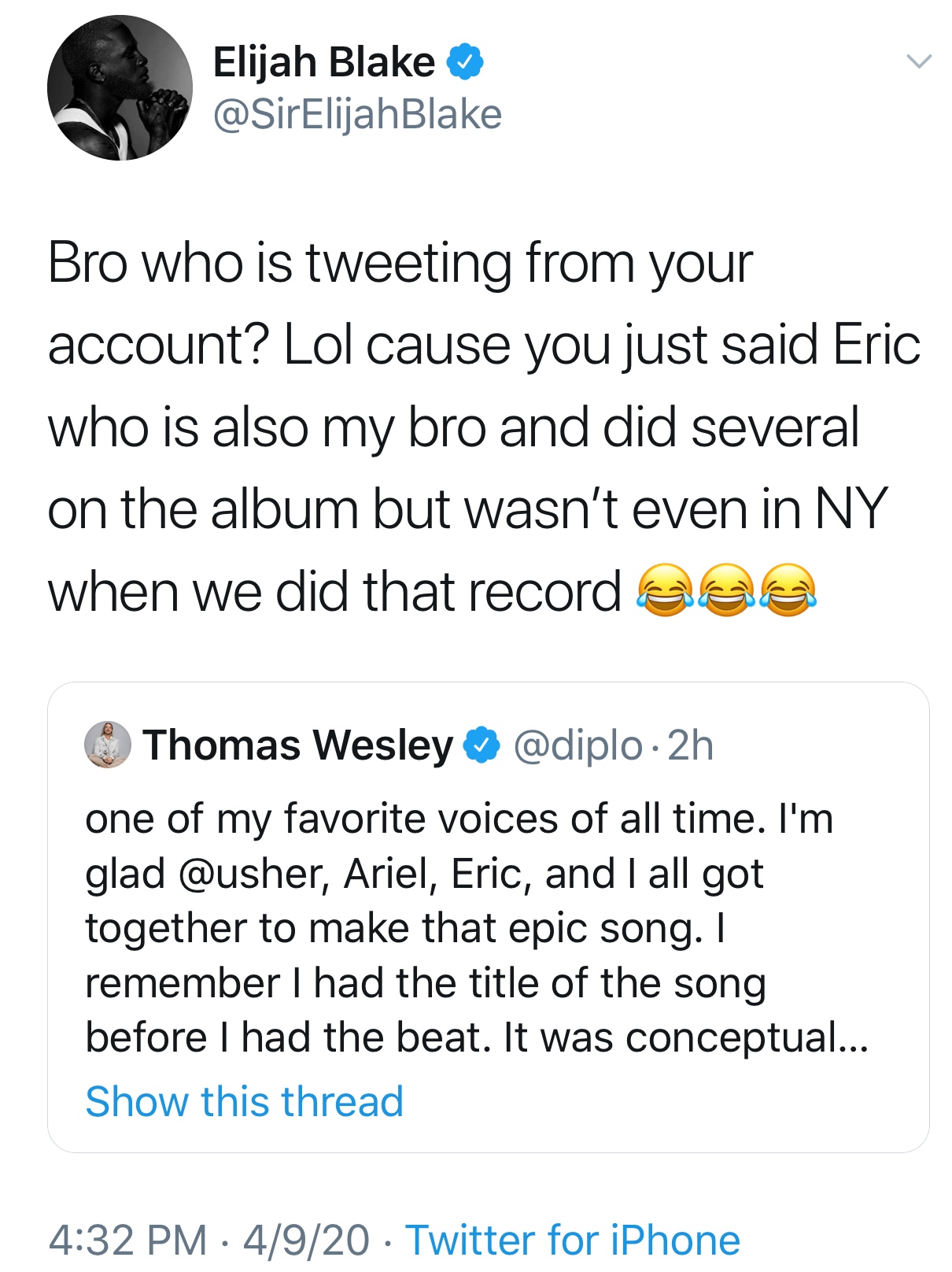 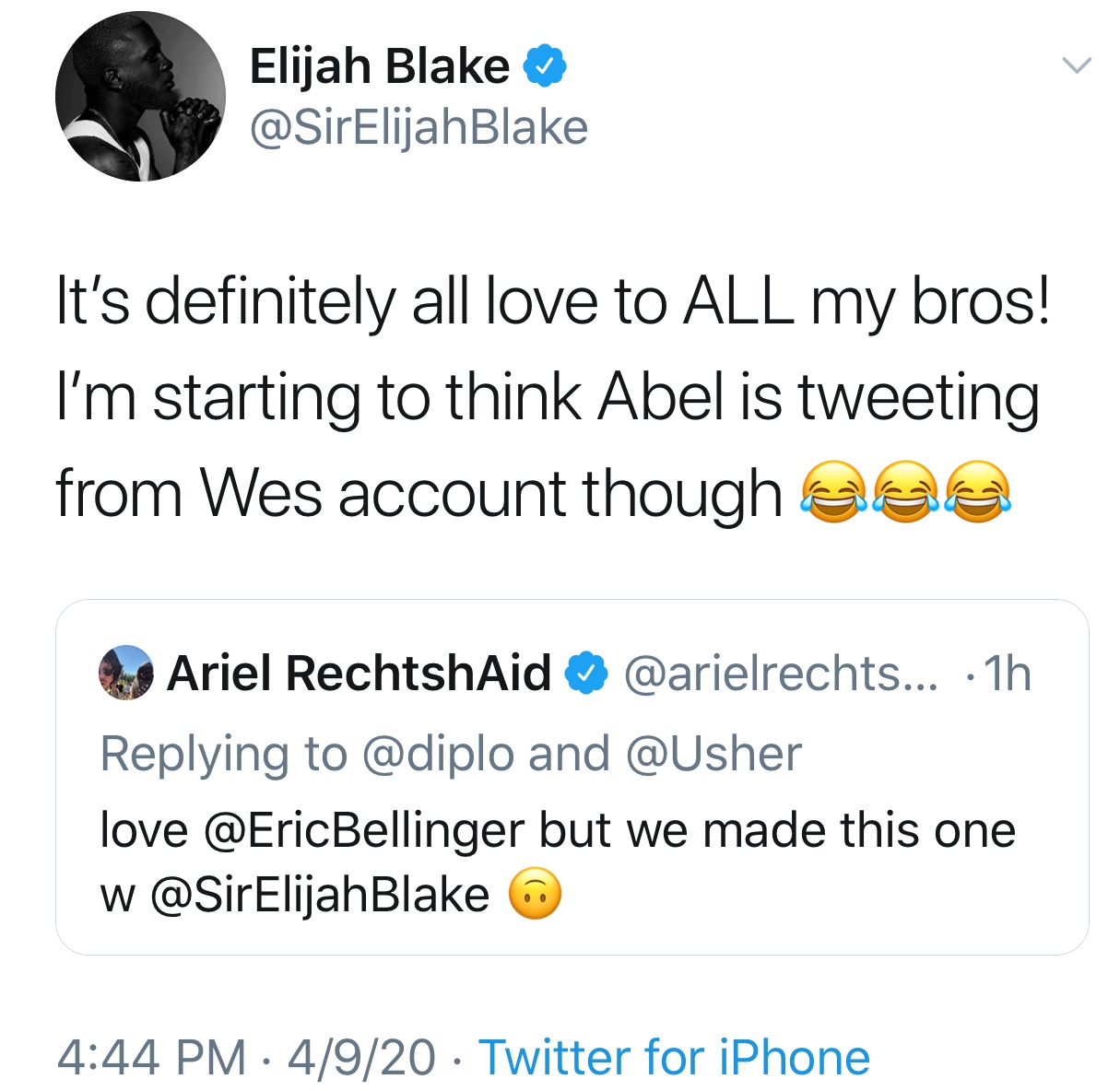 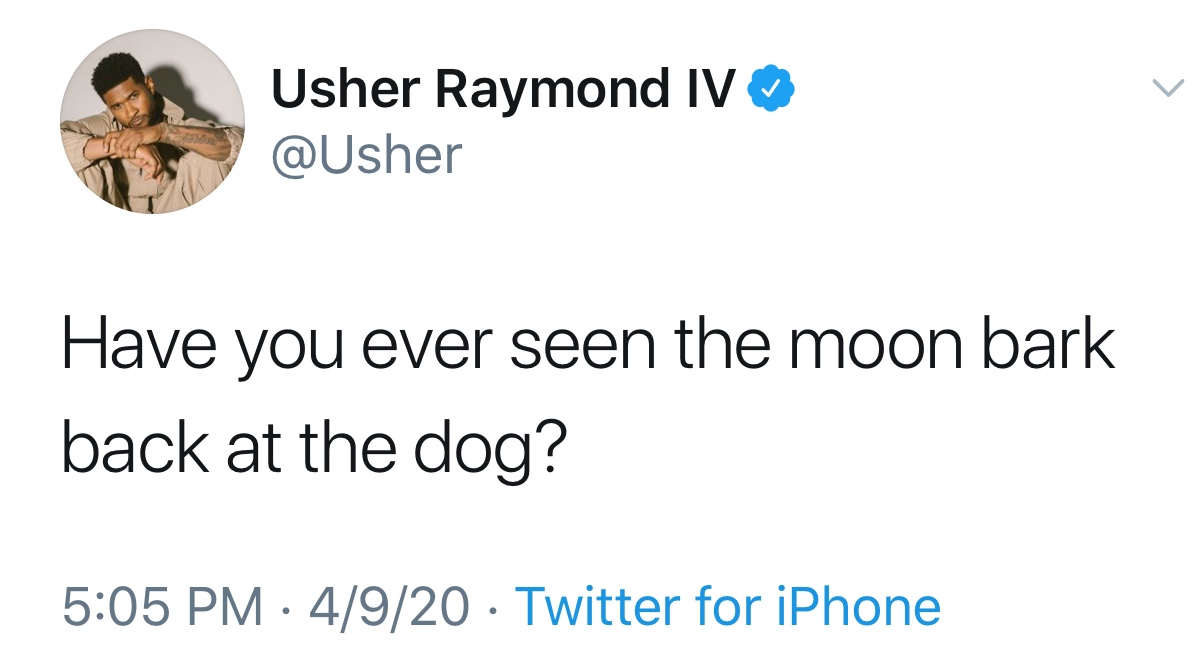