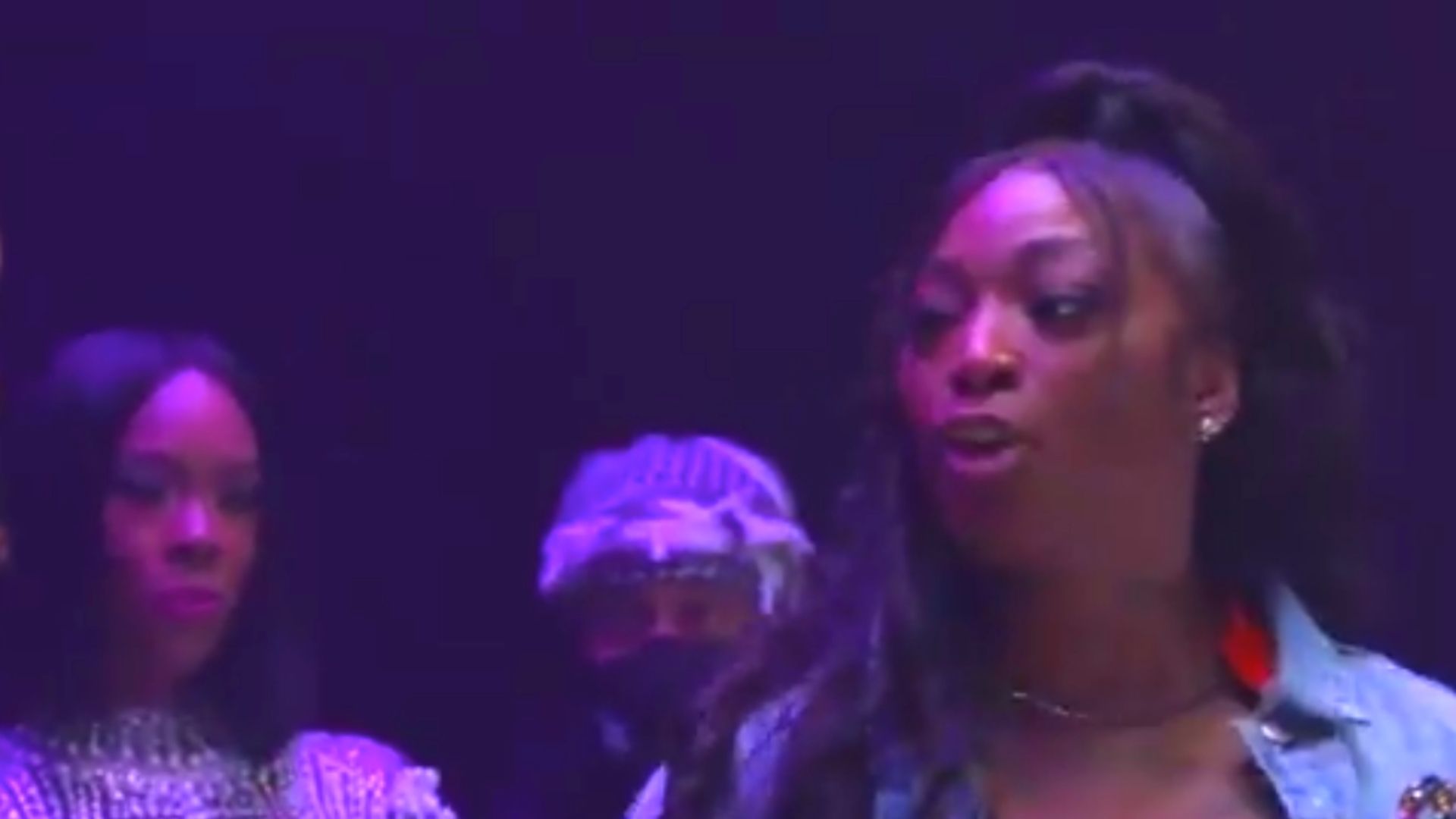 Battle rap is a sport of the mind: one where brawn is not an obstacle that handicaps women when they are up against the opposite sex. If you didn’t believe that before, the second KvQ card between the Ultimate Rap League and Queen of the Ring definitely proved it.

Split down the middle, the performers gave fans 2-2 and 1 debatable, ending the #URLALLSTARS weekend with a bang. Not to mention, through the relationships of the event’s producers, super couple Remy Ma and Papoose were in the building, dropped an exclusive freestyle, and put an additional stamp of officiality!

Remy noted that she has been down with Smack since the bearded host and URL owner had a 5 o’clock shadow.

“So, I want this platform to be what it is now … and [get] even bigger and better.”

She continued, “People can start really start getting that bag. N**gas got bills … they got kids. [They] have the talent and deserve to see compensation for that.”

Her husband, Brooklyn’s own Papoose, noted that he saw this coming all along and that was why he shouted Smack out back in the day in a song.

In his song, “Monopoly” released in 2005, Papoose predicted Smack’s current success. He said in the third verse, “He got a DVD flow. They need to give me man, Smack, his own TV show. The voice of the jails, voice of the streets.”

In another song was called, “F**k the Hip-Hop Police,” seven years ago in 2014 he rapped, “Smack shootin with his camera for the DVD. I’m shooting with my mac, show wanna be on my mac DVD.”

The two Hip-Hop vets and battle rap enthusiasts dropped their freestyle, but also cheered on the battlers as they put on the show.

“All that other sh*t for the birds and I’m impeccable.” — Fiirst Ladii Flamez

“This was supposed to be a long-lasting relationship, now the flame is missing.” — JC

People said that this was a mirror match, pairing the Pontiac rap god JC against the Richmond newcomer Fiirst Ladii Flamez. But very few cultural doppelgangers resemble when they are standing next to each other. Ariana Grande sounds like Mariah Carey until someone pulls up “Vision of Love” and hears the Butterfly singer’s five-octave range. They thought Action Bronson sounded like Ghostface; Shyne sounded like Big; Casanova 2X and Pop Smoke sounded like 50 Cent; a Chrysler 300 looks like a Phantom until — yeah not really.

The same could be said about this JC and Flamez. What can’t be said is that they both weren’t fire.

JC was the O.G. masterfully constructed rounds that demonstrated three things: 1) he really is different when it comes to his pen, 2) he is fin to smoke anyone regardless of gender, and 3) he respects Flamez and would not disrespect her giving her a “Swamp-like” showing.

For her part, Flamez showed up barking on the diminutive emcee, often using her size advantage to shadow her with her aggression and believable gangsta persona. She too came to rap, making sure that you heard creatively thought-provocative bars that can only come from the mind of a genius. While she did not win the battle, losing respectfully in a Gentlemen’s 30, she accomplished something way greater than a “W.” In this first battle of the night, she established herself as her own “unique gift” to the culture. Comparisons be damned: JC 3-0

JC and First Ladii Flamez was 🔥. But JC was Up there. Crazy performance. Kings 1-0

Naw. Hustle just battled a Weak Verb. That last spot should be JC. He 30ed a strong First Ladii Flamez

First Ladii Flamez is my favorite female battler at this point.

Loso blends the sacred and secular in such a way that sometimes you forget that he is a Christian battle rapper. He doesn’t rap like an usher. He doesn’t rap like the old deacon or “Willing Worker.” What he does he do …through his unique skill set … is seems to have created a redemptive hermeneutic through battling. When he mic’d up, don’t expect a sermon but perhaps a homiletical demonstration of rhyme turning each round into aural hymnals. The church boy got bars.

He has more than that. He raps smart. The church thing was there … but with that anointed pen he did what no one thought he was going to do — beat Viixen.

I BETTER GET APOLOGIES FROM ALL OF YALL ALL FREAKING NIGHT!!!!

Female Champion of the Year, she had all the “rah rah” behind her. It was there for a good cause. Viixen is dangerous. For the battle, she brought to the table the passion of someone who has gotten some shine but wants to keep her name. Her aggression was there (despite a rebuttable stumble that made it super hard to recover from) but was not enough to eclipse the lyrical miracle-ness and perfectionist performance of the Horseman.

Before that battle, the Queen of the Midwest enjoyed an overwhelming amount of celebration. During the battle, despite showing levels in her pen game, she did not conduct the same electricity that she had against DNA. The lesson that Loso taught her is that battle rap is an “any given Sunday” type of sport.

She was good, but not enough to knock off his halo; Loso humbled her on this stage. But he did not kill her. Loso 2-1.

#URLAllStar #battlerap last night’s kings vs queens battle was a classic. The Loso vs Vixen was insane 2-1. Loso ate that battle. Vixen did her thing she was hard.

Loso watched that DNA vs Viixen battle and said she ain’t doing that s### to me. He was right. She never stood a chance, I definitely predicted that battle wrong. It was a 30 but it was over after round 2. She gon cry in the car. Stop trippin’ Loso that’s a female. pic.twitter.com/EHpJdthqrd

Bruh the way Loso played to the cameras 🔥🔥🔥. He really showed there’s a difference.

Out the gate, this battle had earthquaking-energy. Dramatically picturing what hood love looks like in so many cities across the nation.

“But they are not a couple,” you might argue. They are not. Still, the movie created in their battle resembles Tamika and Ray Ray, Shaniqua and Mike Mike, or Pudding and Knowledge Born Justice Jenkins.

Coffee immediately jumped-in snapping in T-Top’s face like an angry baby mother. She was not playing with him, getting close up in his face and pointing her beautifully manicured fingers in his face. He took it, smiling through his mask while holding his head down. The top-tier sportsman that he is allowed him the posture to not snap. Or that could be the street conditioning from growing up in Fuquay-Varina. He knew he would get his time. And when it came, the bear barked.

The fan vote gave it to T-Top. However, honestly, this was the only debatable of the night. Both put on a show. Both talked about the street stuff that fans love hearing from them. Some took points away because Coffee’s rounds were a little long and others took off because T-Top used a fake angle. Either way, similar to the two before, this battle was fire. THIS IS WAS THE BATTLE OF THE NIGHT!

T-Top Vs Coffee Brown live recap from last night! @yuLoveCoffee you made me a real believer last night, your presence and conviction along with your material was levels about what I expected, salute!!!! 💯💯🙌🏽🔥🔥🔥🔥🔥
https://t.co/XiKux7i6zh

I just watched T-Top vs Coffee again … sorry but I’m not seeing a scenario where she got a round. What am I missing?

Aye Verb has built a social media platform and persona based on his chauvinistic views. Originally scheduled for Valentine’s Day, many thought he was going to be a battle where he would play off of relationships — and women’s inability (unworthiness) to be in one with him. But this battle was done in March, women’s month. So … that changed everything.

Ms. Hustle, the First Lady of URL, stepped up and showed all hundred thousand plus watching on the Caffeine.TV app what women could do.

There was not one moment where she did not look like a star. She was polished and beautiful, but by no means is that what kept our eyes locked on her. It was how bar after bar she stripped him of everything bit of toxic masculinity that he dressed himself in.

The new wardrobe he was left wearing is now decorated with the badge that says: “I got beat by a girl … badly.”

And he wore the defeat gracefully. HUSTLE WAS THE BATTLER OF THE NIGHT, GETTING THE BODY OF THE NIGHT.

“Welcome to The GULAG” 💣

Tay Roc, the known face of URL and the last one to battle against Aye Verb, also took a loss to a queen. The battle against O’fficial has been one in the works since she took shots at him last year during the Royalty card.

At that time, no one believed that she could win… but the Bardashian knew something about her ability. She knew how she would pop off. She knew how to play to the camera. The new redhead knew how to punch and land, blinding any gender-based bias.

But Tay Roc was not a bad rapper … this was just not his day … and to her benefit, the Gun Bar King tried to do something new that did not go over well with the fans.

All in all, without dispute, Kings vs. Queens II was another fire event from the Ultimate Rap League. 2-1 O’fficial.

[email protected] 🐻 is just getting started!