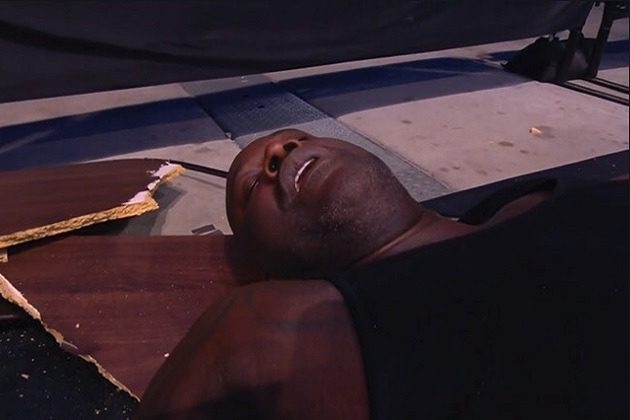 If Bow Wow or Soulja Boy are really serious about stepping into the squared circle to compete as a professional wrestler, they will have to follow a huge WTF moment from another Platinum-selling rapper. Shaq Diesel album creator Shaquille O’Neal made his All Elite Wrestling in-ring debut on last night’s Dynamite.

The 4-time NBA champion/basketball Hall of Famer teamed with wrestling newcomer Jade Cargill in a mixed tag team match against AEW Executive Vice-President Cody Rhodes and rising star Red Velvet. One specific moment from the match caught the attention of a lot of social media users.

As Shaq stood on the side of the ring, Rhodes jumped over the top rope and rammed the over 7-foot-tall athlete through two tables set up on the floor. The image of O’Neal laid out at ringside became an instant meme online as #AEWDynamite quickly climbed to the top of the Twitter trends list in the United States.

This is not the first time a celebrity guest went viral for an appearance on Dynamite. Rap icon Snoop Dogg also joined Cody Rhodes for a special January 2020 episode of the TNT program dubbed New Year’s Smash. Snoop’s AEW cameo included the 49-year-old musician diving off the top rope to get a mock pin on Serpentico.