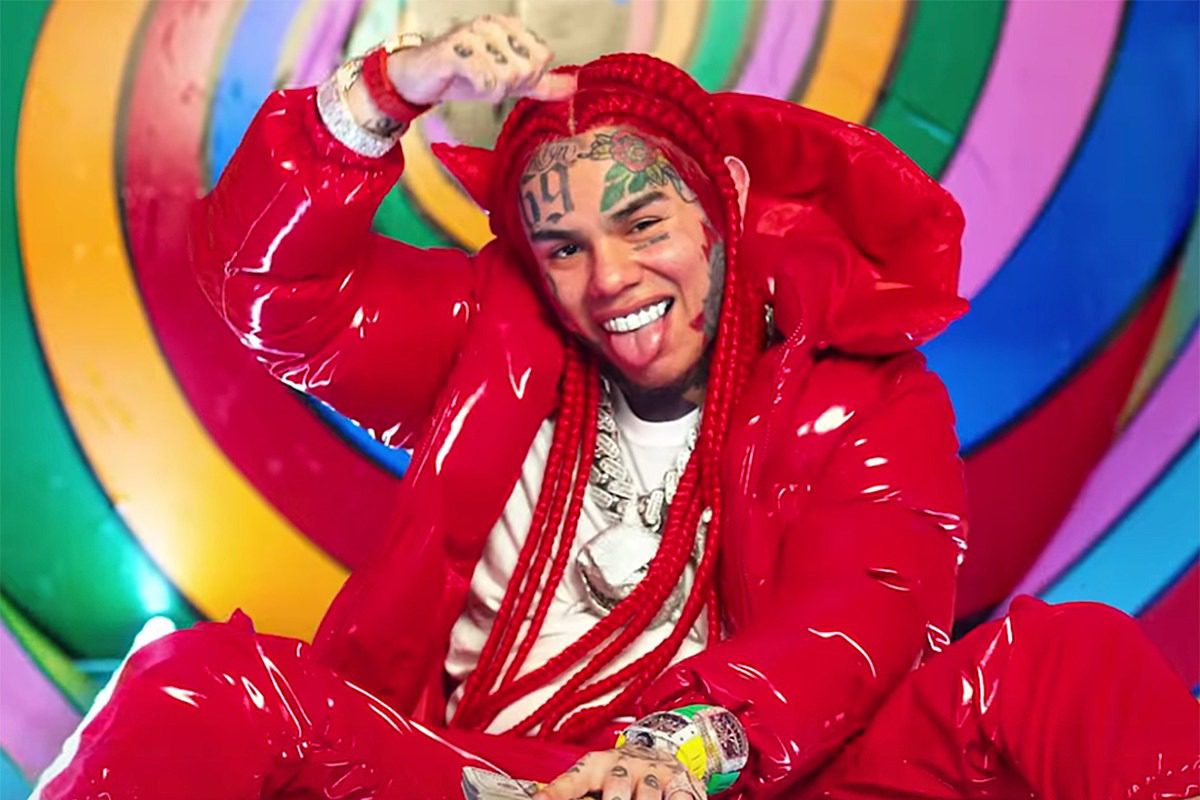 6ix9ine is no stranger to pointing the finger at other rappers and he made sure he did so once again during a recent Instagram live session.

During a livestream on Thursday night (June 11), just before releasing his new single "Trollz" with Nicki Minaj, Tekashi presented a piece of paper with a list of rappers' names. He took aim at Meek Mill and Snoop Dogg, labeling them snitches. He also went in on Future, calling out the Atlanta rapper's claims of drug use in his music and his relationship with Meek.

The Brooklyn rapper, who has exchanged words with the Dream Chasers Records founder via social media in the past, essentially called Meek a hypocrite for being signed to a management company that 6ix9ine claims has an executive who became a cooperating witness for the Drug Enforcement Administration (DEA) in the 1990s.

"I’ma start off with Meek, right?," 6ix9ine begins. "And look, you need this clout. I’m not clout-chasing because I got more followers than you, I’m more popping than you, right. You know this. I’ma show you something real quick."

Tekashi's next target is Future. The "Trollz" rapper calls out the Atlanta native, making claims that he doesn't uphold his duties as a father. "Future, you don't take care of your kids, right?," 6ix9ine says. "You can't compare me to you because my baby moms was having sexual relations with my co-defendants. I am going to stay away until I'm off house arrest. You rap about all these drugs but never got arrested on a drug offense. You rap about molly, Percs. Never got arrested for no drug offense."

He then mentions Hndrxx's friendship with Meek Mill while also asserting that he and Meek can only land on the charts with Drake's help. "You go and say if you hang out with a rat it makes you a rat," he continues. "You just posted that. So, what does that make you? ’Cause you hang around Meek. You hang around these niggas. What does that make you? Are there levels to the snitching? Help it make sense. We all know, homie. I am half your age. You're an old head to me. I'm half your age. If you're mad that I can chart. Listen, I don't need Drake to have a platinum single. I don't need Drake. You and Meek Mill need Drake so y'all can chart."

Tekashi ended his rant with Snoop Dogg, whom he has called a snitch via social media in the past. "Listen, for Snoop Dogg I'm on you now," 6ix9ine says. "Snoop Dogg, you want to talk all this rap shit? I exposed you already. You hit me up in the DM talking about 'I am holding the white flag please, please.' You can't get mad at me for exposing the truth, right? ’Cause for the two years I was locked up, you know what y'all said. Y'all aired me out for the two years. Y'all had me, y'all aired me out. I'm just replying. Tell me if I am wrong. Wasn't Snoop Dogg and Meek Mill couldn't get my dick out they mouth the whole time I was locked up? 'Rat, rat, rat, rat.' Now, I am on you. You want me to chill? Nah. Nah I'm dragging it, now I'm doing too much cause I'm replying."

6ix9ine also pulled up paperwork supporting his claims that Snoop has snitched. He also showed a video of Suge Knight saying that the Long Beach, Calif. rapper hasn't been to prison and then alludes to the reason, which is that he snitches to avoid going behind bars.

Tekashi had quite a bit to say before unloading his new track with Nicki. Watch 6ix9ine attempt to air out Meek Mill, Future and Snoop Dogg.