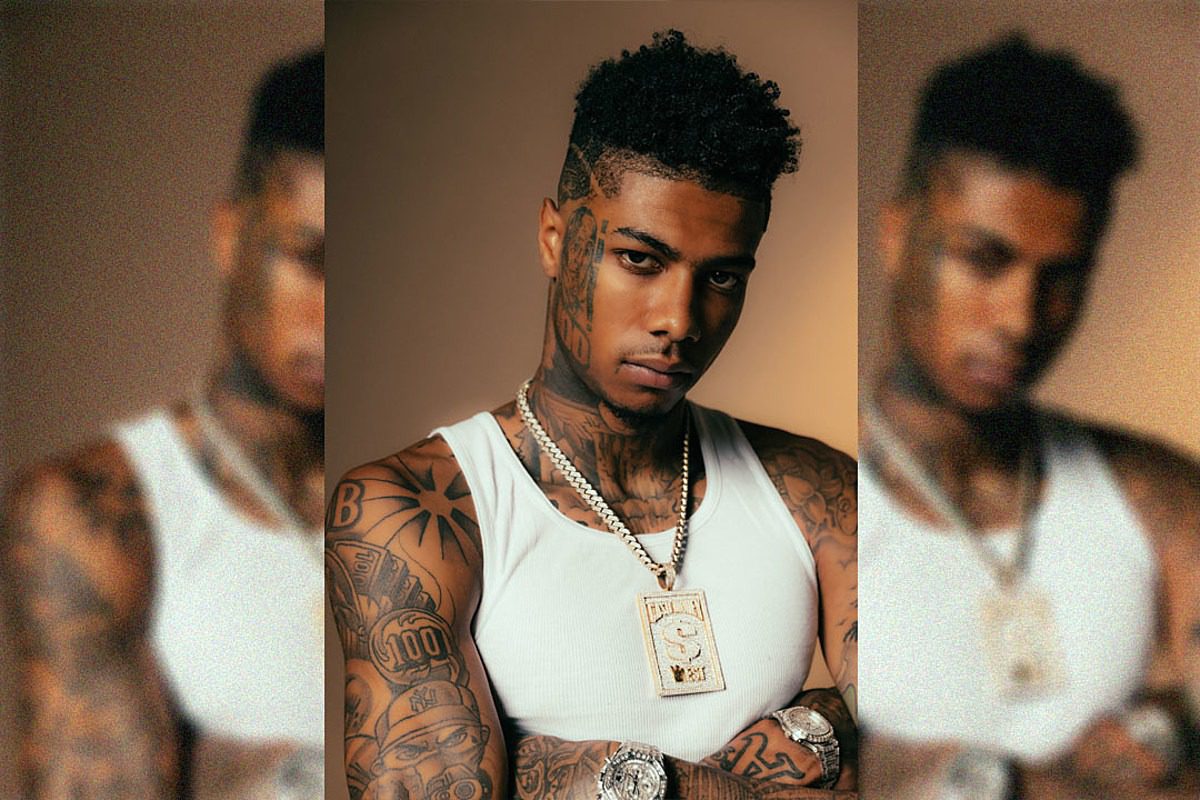 Lookin' at Me
Rapping off beat, social media antics and beef aside, Blueface has managed to build a real hip-hop career for himself. Hate him or love him, he’s got more in store.
Interview: Aleia Woods
Editor’s Note: This story originally appeared in the Fall 2021 issue of XXL Magazine, on stands now.

Social media seems to have a chokehold on the masses’ perception of rappers, but that doesn’t faze Blueface. His viral moments are seldomly random. However, the artist the public sees online isn’t who he is at his core despite the 24-year-old rapper leaning into social networking antics at times.

Tonight, Blueface, born Jonathan Porter, is focused on what’s going on offline. On a brisk evening in August, the Los Angeles native chills at 100 Studios in North Hollywood, Calif., playing cuts from his new projects, an upcoming third album and a collabo tape with DDG. That was prompted by the strong response the two received from their collabo record “Moonwalking in Calabasas.”

Known for rapping off beat, Blueface released his debut LP, Find the Beat, last year after the success of his record “Thotiana.” Now, he finds himself switching direction with his newest effort. This past May, after dropping the video to the song “Outside (Better Days)” with OG Bobby Billions, Blueface became an instant trending topic for deviating from his typical flow and delivering more serious subject matter.

He’s in a different position, no longer a newbie and more confident in playing around with his skills. But where Blueface goes, viral seems to follow. His social channels are known for their wild content. Some of it stems from his OnlyFans web series, Blue Girls Club, which has offered its share of outlandish clips. In July, the rapper got in the ring for a Bare Knuckle Fighting Championship match against TikTok personality Kane Trujillo. Although Blueface won, the event ended bizarrely with a man jumping into the ring to try and fight the hip-hop star.

Here, Blueface, 24, discusses the public’s perception of him, his growth in music, how a stolen car led to his latest investment, if he’ll hit the ring to fight 6ix9ine and more.

XXL: You had your Bare Knuckle Fighting match this past summer, which you won. So, what’s been going on with you these past couple of days?

Blueface: Yeah, I had my fight. I had Rolling Loud [Miami] the next day. Got home. I’ve been doing community service, actually. I got this little case, so I gotta do community service. Watering grass and bullshit. Cleaning up the bathroom.

You were the victor, but the match got a little hectic. A guy jumped in the ring after the match and tried to fight you? What actually happened?

Yeah. I was boxing, clearly. You know, I did my thing. We knew that already, but as I’m taking my victory, a guy jumps in the ring and runs up to me with his camera phone and he’s like, “Fight me, pussy. Fight me.” I looked into it. So, the backstory is, I guess he’s a boxer or fighter and whatnot, and he feels that celebrity boxing is fucking up the sport. I guess ’cause they’ve been training their whole lives, which I get. I get it. But you mad at me. The fuck? So yeah, that’s how that went.

Will there ever be a boxing match with you and 6ix9ine?

I sure do hope so. I would love that.

Before rapping and everything you went to Fayetteville State University and you played football. You left to pursue rap?

Nah, I left ’cause I didn’t really go there for school and football had kind of went left for me. So, once football stopped being what I expected of it, that’s why I left. I didn’t start rapping until maybe a couple years after that.

In between that time period, what were you doing with yourself?

Gangbanging. Nothing really. I regretted leaving for a little bit because of the road I was going down, but I’m happy now. It worked out.

Before “Thotiana” came out and you got signed, you got noticed and you started buzzing. “Dead Locs” came out and “Thotiana” after, then a bunch of different remixes to it. What was that like for you to have to make this directional change from college and playing football, to coming back home to getting noticed, musically?

It was actually my last shot at life. I was working bullshit jobs. Selling weed and shit. Bullshit, just hustles. I kind of fell out of love with all of those things and once I got used to it, that’s kind of not good. Once I found music, I had some goals. With football, I had goals to make it here or make it there. So, once I left [college], I had to remake my goals. So, that was the hardest part, really.

What was the biggest goal that you wanted to accomplish for yourself and have you accomplished it yet?

Oh, yeah. I had to make new goals recently because I did all those. So, hell yeah. Nah, as far as entry-level rap, when I first started, my goals were probably to get a house. I was never like, musically inspired my whole life, so I was never like, I wanna go top 10 [on the charts]. That wasn’t my goal. My goal was just to make it.

You bought a restaurant this year: Blue’s Fish & Soul.

Yeah, that was my first investment actually. But I just made that investment this year. It’s been a while. It took me a minute. You know what’s funny? I was actually looking like, what should I invest in? ’Cause you know everybody says, “Oh, you should do this. You should do that.” But all of that takes credentials, it takes effort. I feel like, I couldn’t find anything that I was passionate about at the time other than music to be like, Oh, let me… So, that’s what took me so long.

How did that work? Life gave it to you, but there’s a backstory.

So, let me tell you exactly how life gave it to me. I was in Miami for a week. I drove to the airport, valeted my car. When I got back from Miami, they told me my car was stolen out of valet.

Well, actually, they didn’t tell me my car was stolen. They acted like I never parked there. Then, the airport police came in there and clarified that it was stolen. So, it was like, Damn, I was having a bad day. I just got that car, so I went and bought another car.

What kind of car was it?

It was a Corvette. So, I got it back. They got pulled over and it got impounded. So luckily, I got it back at the impound. So, I went and bought a new car. I went to this Mercedes[-Benz] dealership right down the street from the restaurant and in the midst of buying the car…you know being a car at a dealer, it takes at least 30 minutes to an hour. I got hungry, I went in there and boom. They were vulnerable and I had the means to, you know…and now I own it. That’s how that happened. I wasn’t even looking.

There’s an internet perception that people have about you. What would you like for people to know about you that they wouldn’t really know?

Shit, probably just that I’m a nice guy. Literally, I’m a nice guy, but to the internet I’m a bad guy. I’ma get a tattoo and leave, or fuck them or leave [them] or like, you know? I got that perception. So, that’s all I want [them] to know. I really joke a lot, so you know how the internet takes jokes. The internet don’t take jokes well. They take it to be serious or it’s gotta like, misconception all the time. So, when I’m joking, I’m taken serious. I let it work for me, you know? I just take what they give me and just mirror it.

Do you care at all about what people’s perception is of you?

Nah, not really. I feel like I’m more true to myself than them. So, sometimes I’m too honest or sometimes I’m too myself, and that dictates the perception half the time. So, nah. It doesn’t bother me. If anything, I play into it more.

The concept of Blue Girls Club, it came from Bad Girls Club, obviously, but how did this happen? Come together?

I had this video shoot at my house when all the strippers were fighting. So, it was inspired by that. I was like, Wow! That was so viral that I should… The fighting part was viral, but that wasn’t the focal point because I had a lot of fun before that happened. You know, that was actually the worst part of the video shoot, but the environment was lit. OnlyFans was a thing at the time, so it was just like, a new hustle. It wasn’t something I’ve been thinking about my whole life to do. It was just an idea and I usually go with all of my ideas.

Who advises you on these ideas? Or is there no one who can talk you off the ledge with certain things?

Nobody can talk me off the ledge once I got an idea. When I get an idea, I look into it before I even exercise the idea. I Google it. YouTube it. Once my shit’s loaded, there’s no de-cocking it. Yeah, nah. [My manager] Wack [100], he always advises me not to do my ideas until he realizes that I’m just gonna do it anyway. And then he advises me how to do it legally at least. So, that’s how that works. But yeah, all my ideas, he’s usually against all of them.

“Outside (Better Days)” was a viral moment for you this year because people were surprised you were rapping on beat, but you were also talking about things that mattered to you. Was that a way of you trying to pivot away from the perception people had of you from the start?

When you don’t necessarily rap on beat, is that intentional?

Nah, it’s not intentional. I just go to the rhythm that I hear. But, sometimes I might have it written before I heard the beat so I’m really fitting the beat into what I wrote instead of fitting what I wrote to the beat. Lately, I’ve just been going in the booth and actually just going with whatever [the beat] takes me to. [My verse on DDG’s] “Moonwalking in Calabasas” shit, I didn’t write it. I just went in there and let the beat take me.

What is the approach for your new album?

Yeah, it’s just more polished. It’s just more, you know, obviously I’m getting better at it if I’m doing it longer, but it’s a lot of experimenting. A lot of tracks I experimented with on there. A lot of the old stuff, but better old stuff. Still that old Blue, but better. That’s all I really been trying to do is just be better.

Check out more from XXL magazine's Fall 2021 issue when it hits newsstands in October 2021, including our cover story with Tyler, The Creator, Lil Nas X's battle for respect in hip-hop, Wale talks about his new album, Folarin 2, find out more about Maxo Kream in Doin' Lines, Bia reflects on how far she's come in her career after "Whole Lotta Money" success, BMF actor Da'Vinchi talks rap music in Hip-Hop Junkie, Isaiah Rashad keeps it real about his faith, SoFaygo discusses signing to Travis Scott's Cactus Jack label, CupcakKe's fresh outlook on life with new album on the way, OhGeesy's new solo career and goals and more.