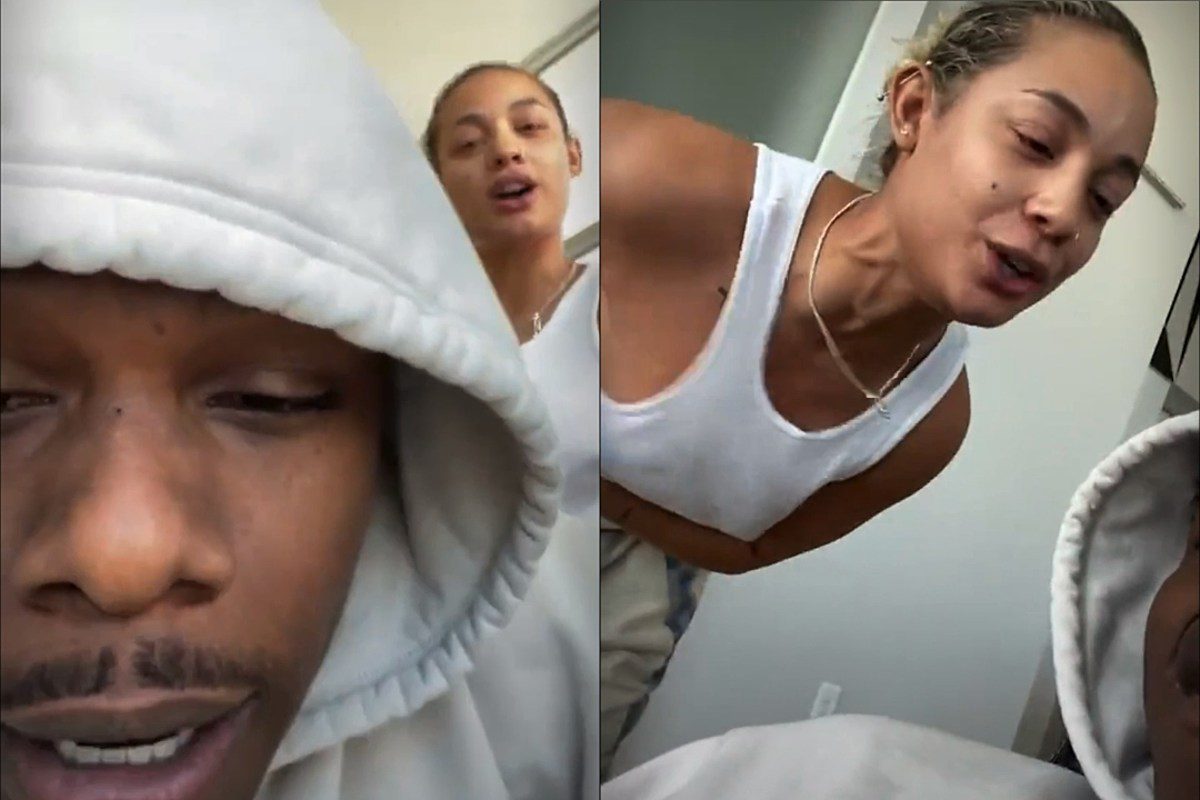 Things between DaBaby and DaniLeigh have escalated following the two, who share a newborn daughter, getting into it on Instagram Live earlier this morning.

In a now-deleted Instagram post shared on Monday (Nov. 15), DaBaby refuted DaniLeigh's claims that they have been in a relationship and she's been living with him for the past three months with their 3-month-old daughter.

The Charlotte, N.C. rhymer, who was accompanied by his personal assistant in the video, explained that he's speaking out on the situation to clear up any misrepresentations about him as a father and taking care of his children.

"First of all," he began. "Me and DaniLeigh is not together."

"Do I act like we're together," DaBaby asked his assistant, who simply replied, "No."

He continued: "Do I make it openly clear that we're not together?" The assistant responded, "Yes."

"We are not going steady," the rapper asserted. "Have not been. That's not what's going on…She does not live with me."

Baby then asked his assistant to confirm when DaniLeigh arrived at his home, to which is assistant said, "About a week ago."

The rapper said Dani came with two suitcases and reiterated that the singer does not live with him and that he has been trying to get her to leave his home.

"She was been supposed to go back," he explained. "Been tryna get her stuff sent here, trying to move in. No. Been made it clear, looked her dead in the eyes, had calm, mature conversations. Like, no. This is not what we're doing."

DaBaby went on to offer his side of what transpired between himself and DaniLeigh, starting from the birth of their daughter.

"Baby three months in," he said. "Right when she was about to be born, I flew out to D.R. I ain't put it on the internet, I didn't do none of that ’cause it ain't about that with me. It's about the kids. If the kid is supposed to be mine, I'm there. This is all I know. I'm a stand up nigga."

Baby continued: "So, I go out to D.R., we out in D.R. Everything is everything…we do what we do. I come out there, I'm waiting on the baby to be born. I get my momma a flight. My momma gets ready to come out there. So once the baby is born, my momma can see the baby when she's born. We come out to D.R., we see the hospital, we see this and that. I'm already like…I don't really want no child of mine…It is what it is, but it's a different country. So, it's cool. I'm rocking to whatever beat."

He went on to say: "Shawty gets into it with her parents while I'm out there in D.R., me and my assistant. We out there. They got they whole thing going on. That ain't my business to be telling y'all. Long story short, they get into it. I tell my assistant to book the jet for the following day so we can get outta here. We ain't from here, we don't know what these folks got going on. Let's go. I'll come back to take care of my baby once she gets here. Right now, we gotta go."

"My assistant is like, 'You do not need to leave her in that household.' You do not need to leave your baby out here,'" DaBaby shared. "I'm like, 'Nah, book the jet.' From that night to the next morning while we're waiting on the jet to be there, shawty calls my phone, calls my assistant's phone, her momma DM'ing my cameraman, calling and texting my assistant. Her momma and them trying to control her, trying to keep her over there. She trying to run away with me. I'm not trying to have nothing to do with none of this shit. I'm just trying to take care of my baby when it gets here. And make sure my baby is straight when she gets here."

DaBaby then explained: "She calls me 150 times. I'm like, 'Nah, you need to stay here with your people. You need to work out what you got going on.' All this shit on record ’cause shawty, that's how shawty…shawty will go all out. Shawty will text me 100,000…this shit is deep, but that's what I'm in. This my reality. This what I'm mixed up in."

DaBaby claims Dani didn't feel safe having her baby in the Dominican Republic, so he says they all took a jet back to the States where he called a private doctor and DaniLeigh delivered their child.

Around the 7:30-mark, DaniLeigh enters the frame while Baby is on his IG Live.

"You wanna talk about it?" Dani inquires. "I'm right here."

DaBaby asserts that "nobody was put out," referring to the Instagram post DaniLeigh shared today, which said that Baby was trying to have her and their newborn child removed from his home.

"Like you didn't beg me to come back here from Orlando," Dani says to the rapper. "I can show you the texts. I can call my assistant, talking ’bout you miss me, come back home. All this stuff. The fuck? I already left your ass…Let's see who's cuckoo ’cause I'm talking for myself for the first fucking time. OK."

As DaniLeigh is speaking, DaBaby says on the livestream that someone needs to make her vacate his home.

"You wanted to get on Live, to talk shit and put everybody in our business," Dani continued. "Trying to act like we haven't been together."

Baby chimes in and says, "We haven't been together."

Dani added, "He wants to fuck me, and fuck his baby mother, and fuck all these Charlotte hoes and fuck all this shit, and me be OK with that, guys. And me come back and live here and stay in this fucking house with our child."

DaniLeigh revealed during the livestream that she had a closet, shoe rack and an underwear drawer in DaBaby's house while he questioned why she had items at his home.

At one point, Baby's assistant advises him to end the IG Live, but he refuses, saying that he needs to clear the air.

Dani then tells DaBaby: "You're a fucking dog. Acting like you're such a good ass father. You're not."

The rhymer's assistant interjects and states that her rapper boss is a good parent.

DaBaby then refers to the singer as a "crazy bitch" and tells her that she wasn't his girlfriend. DaniLeigh proceeds to ask another man in the room, whose name is Darius, if Baby has referred to her as his girlfriend. Darius, however, doesn't answer and continues recording the interaction.

DaniLeigh also jumped on IG Live, but decided to share videos and pictures of herself and DaBaby, seemingly proving that they were in a relationship, contrary to what Baby said on his livestream.

After DaBaby uploaded his lengthy IG Live to his page, he removed it and posted a shorter clip about fatherhood and the responsibilities of parenting. He captioned the post, "TAKE CARE OF THEM KIDS no matter what come w/ it."

The verbal dispute between DaBaby and DaniLeigh stems from the rapper and R&B singer having an argument while on Instagram Live earlier this morning, in which Baby tried to kick Dani out of his home and reportedly called the police on her.

It's unclear when DaBaby and DaniLeigh became an item, but the images she shared on her IG Story date back to 2019.