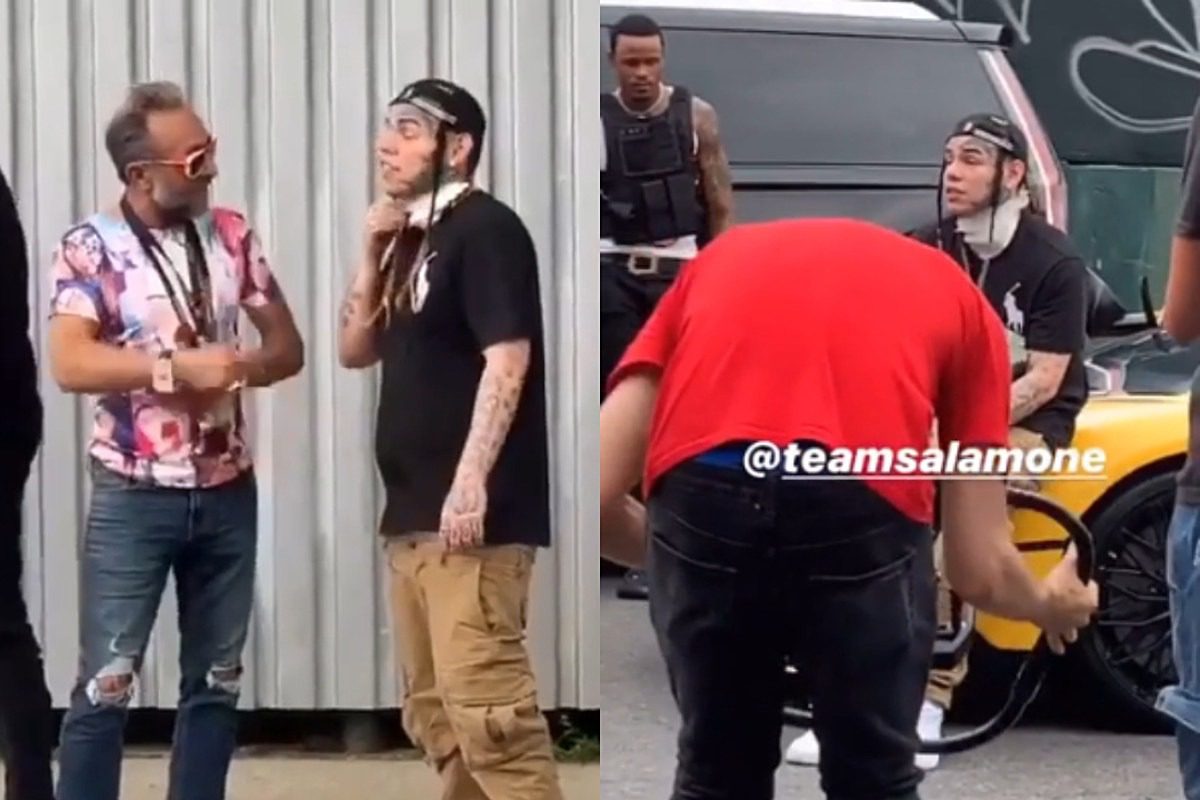 6ix9ine is officially a free man and he's already outside.

On Saturday (Aug. 1), Tekashi completed the last of his 24-month sentence for federal firearms and racketeering charges. This means he is now off house arrest. The first thing he did with his freedom was shoot a music video.

On Sunday (Aug. 2), pictures and video surfaced from a 6ix9ine video shoot for a new track reportedly titled "Punani." Unlike, his previous three videos that were shot in his living room, Tekashi is out in the streets for this one. In the pictures, Tekashi smiles proudly for the camera. In behind-the-scenes footage from the visual, he turns up while being filmed and flosses large amounts of cash. Men who appear to be 6ix9ine's security can be seen milling around wearing bulletproof vests.

This is the first time we've seen the Brooklyn rapper outside as a free man since he was taken into custody along with several other members of the Nine Trey Gangsta Bloods by the Bureau of Alcohol, Tobacco, Firearms and Explosives (ATF) agents in New York City on Nov. 18, 2018. At the time of his arrest, 6ix9ine faced 32 years to life in prison. However, in December of 2019, after cutting a deal, which required him to testify in court and act as a federal informant, Tekashi received a significantly shorter sentence of 24 months. In addition to the two-year sentence, he has five years of supervised release, was ordered to complete 300 hours of community service once released and must pay a $35,000 fine.

While on the stands testifying against Aljermiah "Nuke" Mack and Anthony "Harv" Ellison, both of whom played a role in kidnapping the rapper in July of 2018, Tekashi name-dropped Cardi B, Jim Jones, Casanova and Trippie Redd. 6ix9ine accused Cardi of being associated with the Bloods gang. He spoke on Cas and Trippie's gang affiliations as well. Tekashi also admitted that he and his crew assaulted Trippie in November of 2017 and the tension apparently stemmed from jealousy. Trippie and 6ix9ine were signed to the same record label, 10K Projects.

Wiretapped audio of Jim Jones was also reportedly played in court during the trial. The Diplomats rapper was heard saying that "shorty," presumably 6ix9ine, needed to be "violated" during a phone call to Jamel "Mel Murda" Jones, who is supposedly a leader of the Nine Trey Gangsta Bloods gang. Jim didn't say any names during the call, but it was assumed that he was referring to Tekashi, who was testifying in court against Mack and Ellison. Jim is reportedly associated with the gang as well.

About four months after receiving his official prison sentence, 6ix9ine was granted a compassionate release due to the coronavirus outbreak. Tekashi, who suffers from asthma, was allowed by Judge Paul Engelmayer to finish out the remainder of his sentence on home confinement. Tekahis's medical condition would have made it difficult for him to fight the respiratory virus, if he were to have contracted it while in prison.

On April 2, 6ix9ine was released from prison. Per the terms of his release, he was ordered to wear an ankle monitor, but was allowed to use social media and work on music. Thus, he dropped three songs: "Gooba," "Trollz" with Nicki Minaj, which debuted at No. 1 on the Billboard Hot 100 and "Yaya," which is in Spanish. He was also said to be working on two albums, one in English and one in Spanish.

Now that Tekashi has been released, he looks to continue his buzz. He recently signed a $5 million livestream deal with GlobalStreamNow. Prior to 6ix9ine completing his sentence, his legal team advised that he deactivate his Instagram page to avoid inadvertently sharing confidential information that could jeopardize his safety.

Reports say that 6ix9ine's lawyers also want him to relocate from New York City, but it doesn't look like he's budging on that. Instead, he reportedly plans to hire nearly two dozen former law enforcement officers as his security.