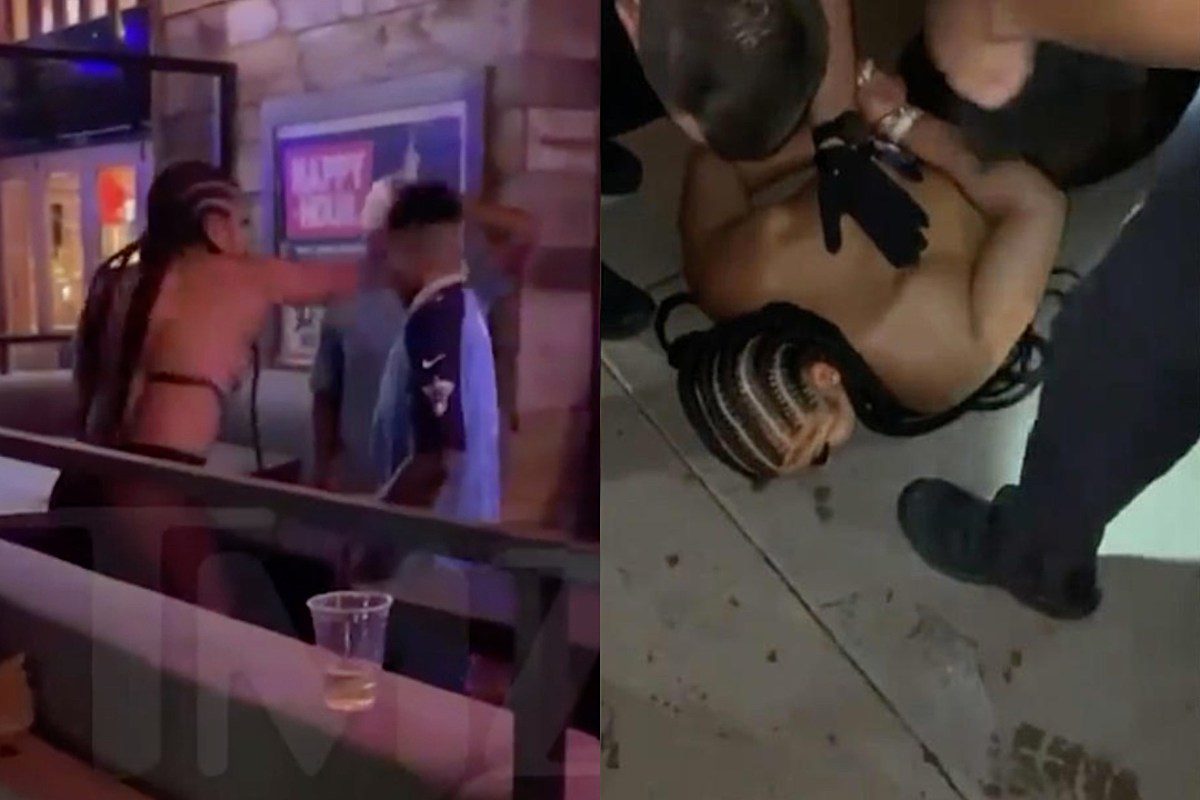 Blueface has offered up some clarification regarding the apparent arrest of his girlfriend, Chrisean Rock, following the couple's most recent physical altercation.

On Monday (Aug. 22), Blueface hit up his Instagram Story to let his 931,000 followers know his version of what happened leading up to their fight and Chrisean Rock's subsequent arrest on Sunday (Aug. 21) in Phoenix, Ariz. The "Thotiana" rapper also explained that Rock's arrest was actually for trespassing at a closed establishment and not as the result of the fight between the two quarreling lovers.

"Hey, check it out," said Blueface in the video below. "Y'all see this 10-second clip on this muthafuckin app and y'all, like, come up with all these theories and weirdo-type conversations. So, let me break the news for you guys. Rock is in jail for trespassing. She's not in jail for hitting me, touching me or anything that got to do with me."

From there, Blueface described the scene from his perspective, explaining how the fight went down.

"We're in the middle of the street, she takes my phone and runs into a closed bar," continued the California native. "She takes the phone and starts running and I'm not even finna chase after her. So I tell the homie, 'Hey, go get my phone, bro.' She swings on him two times, he's like, 'Bro, I'm not fucking with that,' and I'm like, 'Alright, fuck it.' Go into the closed bar …  I'm telling her, 'Come on, let's go,' that's why I'm grabbing her, 'We gotta get out of here.' She's so worried about my damn phone, she's hiding under the barstools and doing all types of weird, freak, theatrical stuff … She gets mad about what she sees on the phone and hit me— boom."

The Dirt Bag rapper finished by explaining that he didn't retaliate by getting physical with Chrisean Rock because of the fact that he didn't want to "make the same mistake twice."

Watch Blueface Explain the Altercation Between Him and Chrisean Rock in the Video Below.

Blueface and Chrisean Rock's relationship continues to get more volatile as it appears she was arrested last night following a fight with the California rapper.

Early this morning (Aug. 22), video surfaced of Blueface and his girlfriend getting into a fight in what appears to be a bar or restaurant, possibly Tru Ultra Lounge in Phoenix, Ariz., where Rock was slated to host a party on Sunday (Aug. 21).

In the footage, Blueface is seen walking after Rock at the venue. He grabs her shoulder and she spins around and responds by punching him in the face. She strikes Blueface two more times seconds later.

In a follow-up video, Rock is seen being pinned to the ground and handcuffed by security and then police officers. She is later seen in a photo standing next to a police cruiser with handcuffs on. TMZ has reported that Rock was arrested and take into custody.

Blueface went on Instagram and shared commentary about the incident.

"Free Rock," he says in the clip. The rapper's face appears to be swollen under his eyes. "I let her hit me in my shit. We ain't never make the same mistake twice. She hit me this time, aye, OK. Security took her, the police took her. Cuh, what can I do? She hit me with a banger, on Crip. Boom. I'm like, woooo. I ain't even do nothing. She'll be ight. Free Rock."

XXL has reached out to Blueface's team and the Phoenix Police Department for comment.

Blueface and Chrisean have a history of toxic behavior lowlighted by physical altercations. Back in May, Rock reportedly got into a fight with Blueface's mother and sister. Earlier this month, video surfaced of the couple getting into a fight on a Hollywood, Calif. sidewalk. Police were reportedly investigating that incident.