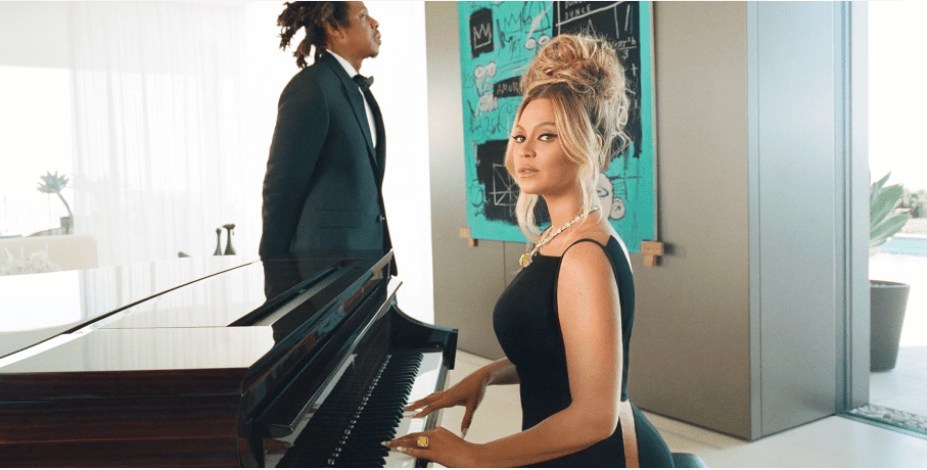 Tiffany & Co released their latest campaign celebrating modern love and it stars Beyoncé and Jay-Z. The ad is said to be the result of close collaboration and shared vision between both the Carters and Tiffany & Co.

“Beyoncé and JAY-Z are the epitomai of the modern love story. As a brand that has always stood for love, strength, and self-expression, we could not think of a more iconic couple that better represents Tiffany’s values. We are honored to have the Carters as a part of the Tiffany family.” —Alexandre Arnault, Executive Vice President of Product & Communications.

The “ABOUT LOVE” campaign is the first the couple have featured in together and is an exploration of connection and vulnerability.

In one of the campaign images, the couple pose in front of a never-seen-before Jean-Michel Basquiat painting, Equals Pi. Beyoncé is pictured wearing a figure-hugging black dress with full-length gloves. The glamorous look is finished off with a messy up-do. Bey wears the 128.54-carat Fancy Yellow Tiffany Diamond made famous by Audrey Hepburn in Breakfast At Tiffany’s. The priceless gem hangs from a long chain adorned with over 100 carats of diamonds. The stone is said to be worth $30 million.

Jay-Z is clad in a black tux, dripping with ice reclined in a stylish wooden chair. Pieces include a striking Apollo brooch in platinum, yellow gold, and diamonds, a Tiffany engagement ring, and a slew of other Tiffany pieces.

As part of the campaign, Tiffany’s will release a short film paying homage to “Breakfast at Tiffany’s”. The film features Beyonce singing “Moon River” captured by Jay-Z on a Super 8 camera.