Despite many naysayers, Lil Nas X is on top of the world.

His music hits the top of the charts whenever he drops. When he decides to go on social media, he always creates a stir. And when it comes to self-expression and representation, he has makes a huge impact on society.

At least that is what Taco Bell believes.

The New York Daily News is reporting that the fast-food giant has appointed the Georgia native (and the company’s former employee) as its first Chief Impact Officer.

The “Montero” artist took to his social media to co-sign the business decision. He tweeted, “life has come full circle, i officially work at taco bell again.”

The social team at Taco Bell immediately hopped into his comments with the very coy flex, “You dropped this in the break room.”

Taco Bell
@tacobell
@LilNasX You dropped this in the break room. https://t.co/sggb3MZGU6 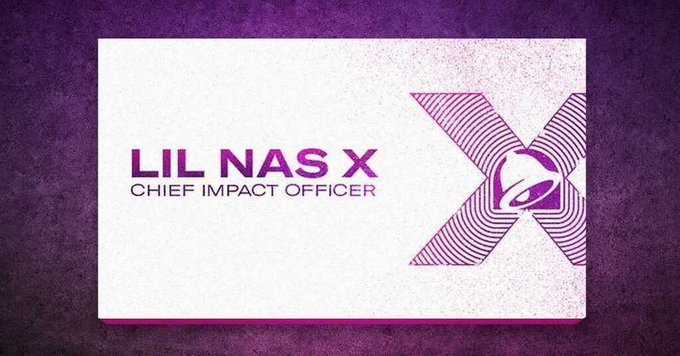 The team posted a cool graphic that simulated a business card, signifying that this indeed is official taco biz.

One of the jobs the chart-topper has on his plate is to inspire fans to check out the returning breakfast menu.

Like McDonald’s did with Travis Scott and Saweetie, the commercial Mexican food hotspot will do cross-promotions with Lil Nas X’s upcoming album Montero and even a few personalized menu items.

Taco Bell CEO Mark King said of the new hire, “Lil Nas X knows the job, the experience and the culture Taco Bell creates for its fans — including its people.”

That is correct. Just five years ago … before his hit song “Old Town Road” took the world by storm, he worked in one of the Atlanta area franchises.