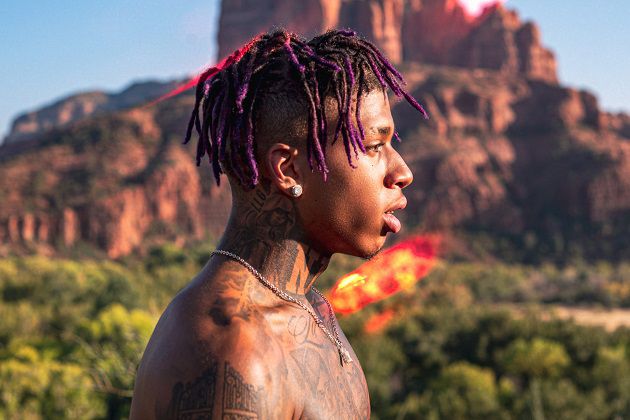 Hip Hop culture has lost quite a few stars because of complications caused by the recreational drug known as lean. One teenage recording artist is now calling on his contemporaries to add a plant-based drink to their double cups.

NLE Choppa took to Twitter to present the #ChlorophyllChallenge. According to the “Shotta Flow” performer, he wants other rappers to add his own liquid Chlorophyll brand to their promethazine and codeine drinking routines.

“I Have A New Challenge For Rappers. For Every Pint of Lean, Or Even Alcohol, Drink A Pint Of Chlorophyll. I Wanna Start By Challenging @MoneyBaggYo. I’ll Bring This To You Personally Fam,” tweeted NLE Choppa. He added a link to his website.

NLE Choppa
@Nlechoppa1
I Have A New Challenge For Rappers. For Every Pint of Lean, Or Even Alcohol, Drink A Pint Of Chlorophyll. I Wanna Start By Challenging @MoneyBaggYo I’ll Bring This To You Personally Fam 💜
Order Here: https://t.co/wvHFakYcd7 #Chlorophyllchallenge https://t.co/94xHmBeCPX

NLE Choppa specifically tagged fellow Tennessee native Moneybagg Yo in his #ChlorophyllChallenge tweet. As of press time, the chart-topping A Gangsta’s Pain album creator has yet to directly respond.

However, approximately 10 hours after NLE Choppa posted his challenge, Moneybagg Yo uploaded a photo to his Instagram Story. The picture included Moneybagg holding a bottle of Villon cognac.

After bursting onto the music scene by declaring himself a “menace” on the “Shotta Flow” single in 2019, NLE Choppa earned a Gold plaque for the Top Shotta LP. He then switched his focus to meditation, veganism, and numerology with his full-length project From Dark To Light in November 2020.

NLE Choppa also began speaking out about the importance of mental health. The 18-year-old southerner spoke about that issue in February while appearing on Fox Soul’s The Mix.

“The problems we face, the trauma we see on a daily basis, how we’re treated just off the melanin skin that we got – a lot of people don’t know that they be facing a type of mental illness,” said Choppa. “They don’t know the things they’re seeing – all this police brutality – everything you feed your mind, your soul, your body, it affects you.”