The sportswoman spoke in a November 2nd message on her Weibo social media account, accusing former vice premier Zhang Gaoli – with whom she was in an on-off relationship at the time – of sexually assaulting her while he was in office.

Subsequently, the message was deleted and Shuai has not been seen in public since.

However, an email was sent to the Women’s Tennis Association including a statement attributed to Peng, claiming that she is okay, which was published by state-owned media in the country.

In response, Steve Simon, the chairman and CEO of the Women’s Tennis Association, said: “The statement released today by Chinese state media concerning Peng Shuai only raises my concerns as to her safety and whereabouts.

“I have a hard time believing that Peng Shuai actually wrote the email we received or believes what is being attributed to her. Peng Shuai displayed incredible courage in describing an allegation of sexual assault against a former top official in the Chinese government.

“The WTA and the rest of the world need independent and verifiable proof that she is safe. I have repeatedly tried to reach her via numerous forms of communication, to no avail.”

He added: “Peng Shuai must be allowed to speak freely, without coercion or intimidation from any source. Her allegation of sexual assault must be respected, investigated with full transparency and without censorship.

“The voices of women need to be heard and respected, not censored nor dictated to.”

Tennis stars worldwide have since spoken out in support of their peer, including Serena Williams, who penned: “I am devastated and shocked to hear about the news of my peer, Peng Shuai. I hope she is safe and found as soon as possible. This must be investigated and we must not stay silent. Sending love to her and her family during this incredibly difficult time. #whereispengshuai.”

Serena Williams
@serenawilliams
I am devastated and shocked to hear about the news of my peer, Peng Shuai. I hope she is safe and found as soon as possible. This must be investigated and we must not stay silent. Sending love to her and her family during this incredibly difficult time. #whereispengshuai https://t.co/GZG3zLTSC6 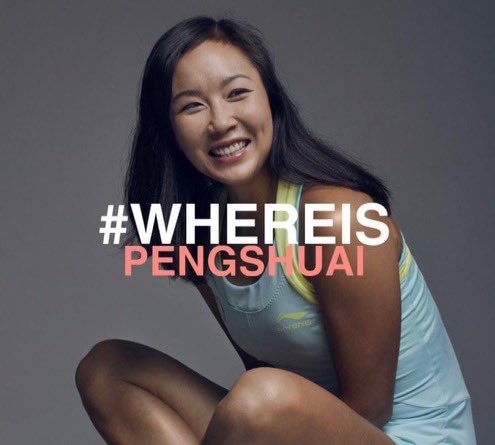 Meanwhile, Naomi Osaka said: “Hey everyone, not sure if you’ve been following the news but I was recently informed of a fellow tennis player that has gone missing shortly after revealing that she has been sexually abused.

“Censorship is never OK at any cost, I hope Peng Shuai and her family are safe and OK. I’m in shock of the current situation and I’m sending love and light her way.”

And reflecting on the incident, Novak Djokovic added: “I don’t have much information about it. I did hear about it a week ago. Honestly, it’s shocking that she’s missing, more so that it’s someone that I have seen on the tour in the previous years quite a few times.

“It’s not much more to say than hope that she will be found, that she’s OK. It’s just terrible. I can imagine just how her family feels that she’s missing.”