Kodiyakredd, and Flyysoulja were booked to perform at Club Liv. The two South Florida rappers sang their hit social media song to a hefty unapproving crowd.

The identical twins, whose real names are Franky and Alex Venegas, both rocked matching orangey-red vests, belts, and sneakers for the show.

No Jumper
@nojumper
#IslandBoys had a tough time with the crowd at Club Liv 😂 https://t.co/UsUhzInOzr 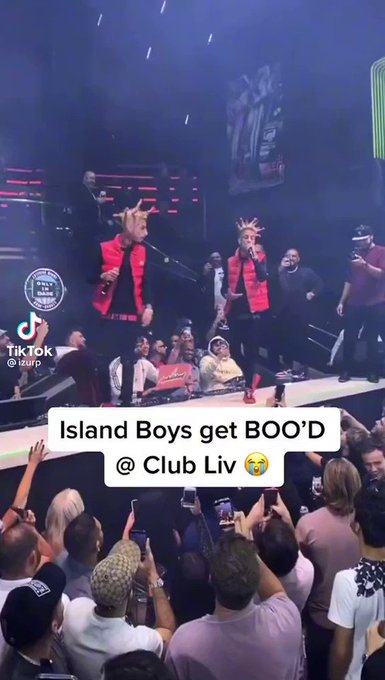 The 20-year-olds have become hot tickets since their initial video of them “freestyling” in a pool went crazy on the interwebs.

The original video is said to have had over 9 million views but has now been deleted from the social media platform.

Despite getting booed by the Club Liv crowd, the twins do have their eyes set on pie in the sky. They recently recorded the once acapella throw away and mastered an actual track — putting out a music video to help market it the ditty-bop as a real song.

Produced by Lose, the song is officially a Kodiyakredd song that features his brother Flyysoulja. They are not an actual duo or group.

So popular are the two, some big stars have taken note. Anderson .Paak ordered a Cameo message from the social media sensations, asking them to send him and his Silk Sensation brother Bruno Mars words of encouragement.

For a small fee, the boys replied.

Annie Moore
@AnyMoreSports
Anderson .Paak ordered a cameo from the Island Boys for him and Bruno Mars with their real names. I am simply deceased 💀 https://t.co/rTnmJsP0Hm

Seems like they have fully embraced their celebrity. But have you?