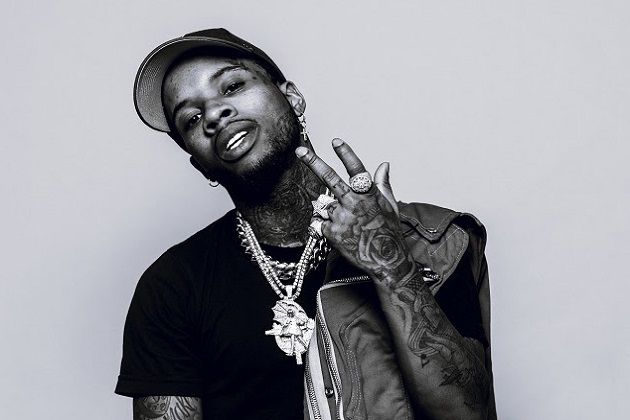 Some of Tory Lanez’s Instagram followers are not pleased with the rapper/singer at the moment. The 29-year-old Canadian is being called out online for allegedly presenting fan contests and never revealing the winners.

Last night, Tory Lanez announced that he was planning to give away $1,000 to ten people that commented their Instagram name under the YouTube video for his “Tuh” single featuring EST Gee and VV$ Ken. The visuals arrived on August 31.

“GO NOW!!!!!! MONEY MONEY MONEY 🍾… I LOVE MY FANS… I didn’t get a chance to call out my first winners of #GrahTahTahGiveBac… SO HERE… I’M ADDING IT TO #TUHGiveback,” posted Tory Lanez in his Instagram caption.

While there were fans excited about the chance to win free money, other people used the post to express their frustration over Tory Lanez supposedly misleading his supporters. His comment section was filled with Instagram users taking him to task.

“U gon actually do it this time? Or ignore and front for views,” posted one Instagram user. Another person added, “We never hear about the winners.” Yet another user wrote, “Not falling for it this time n####.”

There were some people that offered mixed reactions to Tory Lanez’s #TUHGiveback announcement. Someone commented, “You’re capping but we still [f### with you]!!!!!” Another fan stated, “Lies! 😒 But Imma still listen to yo s###! 🔥 😂😂.”

Tory Lanez addressed the grievances. On Tuesday night, he tweeted, “Incorrect… 5 PEOPLE WON THE SKAT CHALLENGE LIVE ON IG… randomly… one thing about me… Is if I tell my fans something ima do it… May not always be on time tho 😓😓 but it’s gone happen 100000 percent.”

These complaints about the #TUHGiveback come after Tory Lanez was recently accused of running an NFT scam. Like with the fan contest, Instagram users flooded Lanez’s account with accusations of corrupt motives.

Over the last year, Tory Lanez has also been embroiled in a Los Angeles County criminal case. Hip Hop recording artist Megan Thee Stallion claimed the Daystar album creator shot her in the feet in July 2020.

Lanez (born Daystar Peterson) was eventually charged with assault with a semiautomatic firearm, personal use of a firearm, and carrying a loaded, unregistered firearm in a vehicle. He pled not guilty to all counts and was originally released on $190,000 bail.

A judge recently ordered Tory Lanez’s bail be raised $60,000 to $250,000 after he was cited for violating a 100-yard protective order by making a guest appearance during DaBaby’s Rolling Loud Miami set. Megan Thee Stallion was supposedly still in the vicinity when Lanez popped out of a costume on stage.

Tory Lanez has maintained his innocence and suggested he could be the victim of an unproven conspiracy to destroy his career. If convicted, the “Luv” singer faces a maximum sentence of 22 years and eight months in state prison.

“When I do something nice it’s genuinely out of the love of my heart and the pain I feel for people in need… I don’t care about repairing an image that people tried to smear and couldn’t. All I can do is play my part. And I’m proud of the part I play,” tweeted Lanez in May.