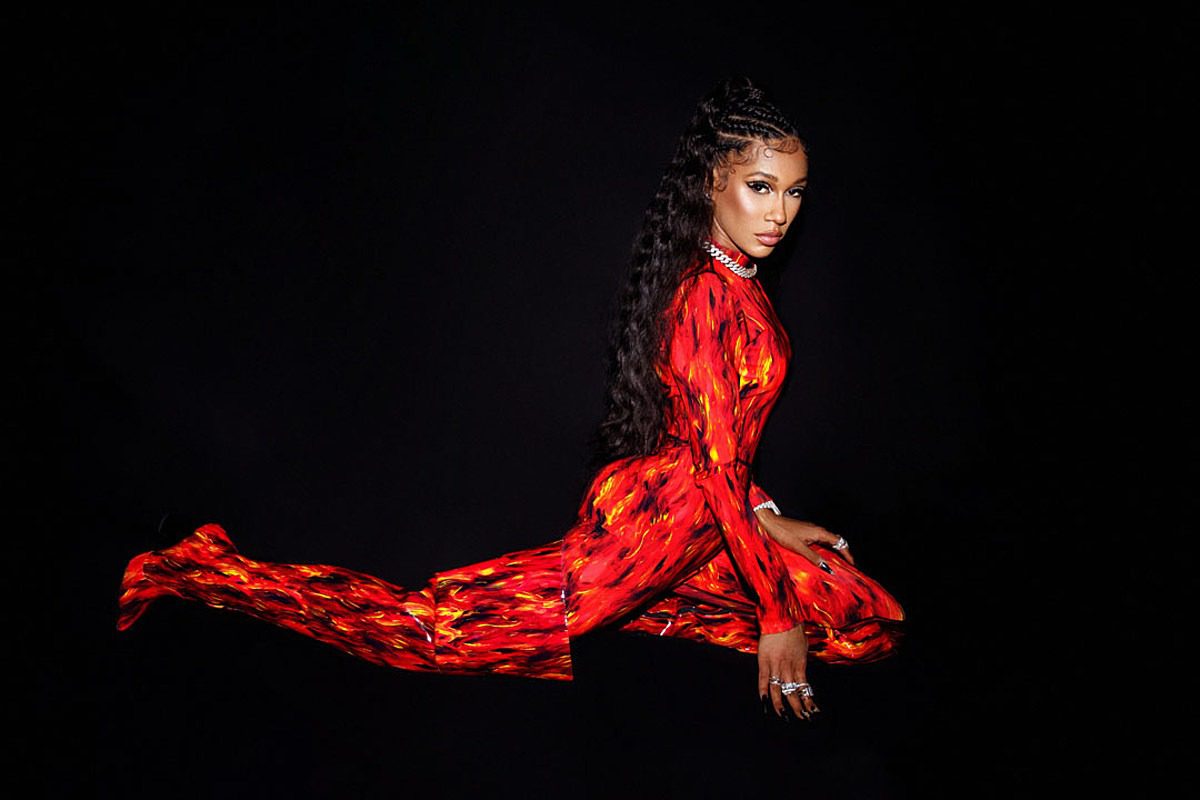 Grindin'
Bia’s perseverance has been put to the test for nearly a decade. Now, with a hit song in the bag and A-list artists supporting her, she’s manifesting more wins.
Words: Aleia Woods
Editor’s Note: This story originally appeared in the Fall 2021 issue of XXL Magazine, on stands now.

After almost 10 years of enduring the ebbs and flows of the music industry, Bia is a living, breathing example of what happens when career seeds are planted and the end result pays off in a major way.

The Medford, Ma. talent first burst on the scene in 2014, as an artist on Pharrell’s I Am Other imprint on RCA Records. She had initially been discovered two years earlier by rapper Fam-Lay, who jumped on board to manage Bia after hearing her first record “High.” Fam-Lay eventually introduced the young rhyme slinger to Pharrell, who decided to get behind Bia by signing her. That same year, she dropped her debut mixtape, #CholaSeason, and starred in Oxygen’s Sisterhood of Hip-Hop. A guest appearance that almost didn’t happen came next, pushing Bia to the forefront. The aspiring star connected with Latin sensation J Balvin for the 2016 track “Safari” featuring Pharrell and Sky. The song was a hit and currently has over 447 million Spotify streams.

In 2018, Bia—who is of Afro Puerto Rican and Italian descent—dropped her EP, Nice Girls Finish Last: Cuidado, but after the support and backing from RCA and I Am Other fell a bit short, Bia went independent the next year, trusting her own talent and remodeling her approach to creating music. Her verse on Russ’ “Best on Earth”—which Rihanna claimed on IG was her then-new favorite song—arrived that same year, and things soon veered onto the fast-track for Bia. She then signed a new deal at Epic Records and put out her first EP, For Certain, which showcased “Whole Lotta Money,” a TikTok hit with over 40 million Spotify streams. The song caught enough attention that Nicki Minaj jumped on the remix after Bia had tried to reach out to the rap star via Instagram DM years earlier. Bia scored another win this year when her track “Skate” became the official theme song of the NHL’s 2021 Stanley Cup playoffs. She’s the second rapper after Eminem to accomplish this.

On an August afternoon, Bia, 30, opened up via Zoom about her rap hustle, the impact of manifestation on her career, working with Nicki Minaj and more.

XXL: When you first got in the game you were signed to Pharrell’s I Am Other and RCA Records? What did you learn from Pharrell at that point that has helped you to navigate from that point until now in your career?

Bia: I would say some of my most valuable lessons I learned from him [is] in terms of creating. I’m a feeling writer and I got that from him. We go in and we write what’s true to us, what’s true to our heart, what’s on our mind. Definitely like, song structure. I feel like I’m a great songwriter because I’ve got to learn from great people like Pharrell. And also, he’s just wise.

When you have someone like that that’s a mentor, he teaches you how you want to treat your fans and other people. It’s like how you want to move with a higher purpose, a better energy. So, I learned that from him, too. Energy is so important to me.

Do you guys still have a working relationship or can you lean on him if you need advice for anything?

I’m sure I can give him a call and say, you know…any type of advice, he’ll be there for me. I’m forever thankful for Fam, Pharrell, for everything they did in my life, you know? Helped me become the businesswoman I am today. I’ll always look at them like family. We don’t talk every day, you know, but it’s love always.

After you were signed to Pharrell, you said you were independent for a little bit. What kept you motivated?

I feel like even when I did have the machine behind me with RCA, the machine wasn’t behind me. So, there were years [when] I didn’t have a machine behind me. It was just me, my team, I Am Other. We were just doing things, whatever we could do at the time. We used to say we have champagne taste with a beer budget because we knew what we liked, but we couldn’t get to it just then.

I think that a lot of artists run into, you know, your vision is so much bigger than your budget, sometimes. Being able to give the right vision to the world… All that stuff is what develops you as an artist today. Knowing how to move and how to do those things.

How has it been for you, knowing the level of talent that you have and there are artists who are bubbling, and it’s like, what about me? How did you overcome that?

Oh, that’s a good question ’cause I don’t think that I knew what that feeling was at first. ’Cause there was never anything that I wanted so bad that was so hard to attain for me. And usually everything for me just came naturally. Even getting signed in the beginning, it came so natural. So, when I hit that bump in the road of like, that plateau, it was like, you know, you gotta reinvent yourself. Stop pouring into the people that don’t care about you, and start pouring into the people that do, you know? That developed me.

“Whole Lotta Money” is all over TikTok. Did you expect that to happen when you put the song out?

No, ’cause like I said, I don’t have any expectations. I was like, Whatever it does, it’s gonna do, and, you know, I just hope that people love it.

I prayed for that. I wanted that, you know what I’m saying? I’m like, I hope this does well, that people love it. But I still didn’t have any expectations on it. I had no idea it was gonna do this. No idea it was gonna have a Nicki Minaj remix. It’s been a dream come true.

Before the song “Whole Lotta Money (Remix)” came out in July, you and Nicki Minaj did an Instagram Live and you mentioned that you had been DMing her long before the song even came to be. That falls under the manifestation umbrella, right?

What does manifestation mean to you and how has it impacted your career?

I’ve manifested my whole career. Even everything that I want, I’ve sat down and talked myself through it way before I had it. It’s definitely a mind thing. Even when it comes to “Whole Lotta Money,” because even when I wrote the majority of that song, it’s relatable to people who don’t have a whole lot of money, but it makes people feel like, You know, I’ma go get some money. So, that’s all it is. I wanted that to feel like manifestation.

You tweeted that you have so much respect for bigger artists who jump on smaller artists’ records. What advice would you give to somebody who’s on the come up?

I would offer to them: pour into the people that are pouring into you. Rock with the people that are rocking with you. Everybody else will come later. I remember when I did the song “Safari” with J Balvin and Pharrell. I went in and killed my part and there were people on his [J Balvin] side that wanted to take me off because I had no followers. I had no real credentials. I wasn’t a Latin artist. There were many people who told him, “I think you should put somebody else on. It can do better.” And he was like, “No, I’m gonna keep Bia. She killed it.”

You’ll have people that believe in you along the way and they’ll lift you a hand, they’ll help you up. Like Nicki hopping on my remix. She gave me a hand. Just like Rihanna shouting out “Best on Earth,” she’s helping me up. I’m gonna stick with the people who are sticking with me. Whoever’s not sticking with me is dumb.

Your song “Skate” was the NHL Playoffs theme song this year. That’s rare for a rapper. How did that happen?

We cut “Skate.” It’s like, “Wrist Stanley Cup, I can show you how to skate.” And then my team, Epic, everybody was like, “We need to get this to the NHL.”

[The NHL] were like, “This is great, but let’s just change a couple things.” ’Cause it’s a culture gap [between] hip-hop or rap and hockey. So, we had to work on it a little bit just so that I feel like it would make sense to both sides and it came out beautiful.

You’re going to release your deluxe EP, For Certain. Was the process different than what you did for the original?

Nah, ’cause you know what, I cut so many songs at a time and I knew they all wouldn’t fit on the first EP, so I had my favorites in case there was gonna be a deluxe. I liked them equally as much as the original songs that were on For Certain, if not more. Some of these new additions, I love them a lot. Just as much as “Whole Lotta Money.”

What’s next for you?

Business, business stuff. Business ventures, different things. I’m working on a makeup line. I love makeup, I love graphic [eye]liners, I love nails. I do nails. Only my own sometimes, Nails for Certain. I have a nail [Instagram] page called @nailsforcertain, so I’m definitely going to tap into the business space heavy this year.

Check out more from XXL magazine's Fall 2021 issue when it hits newsstands in October 2021, including our cover story with Tyler, The Creator, Lil Nas X's battle for respect in hip-hop and more.