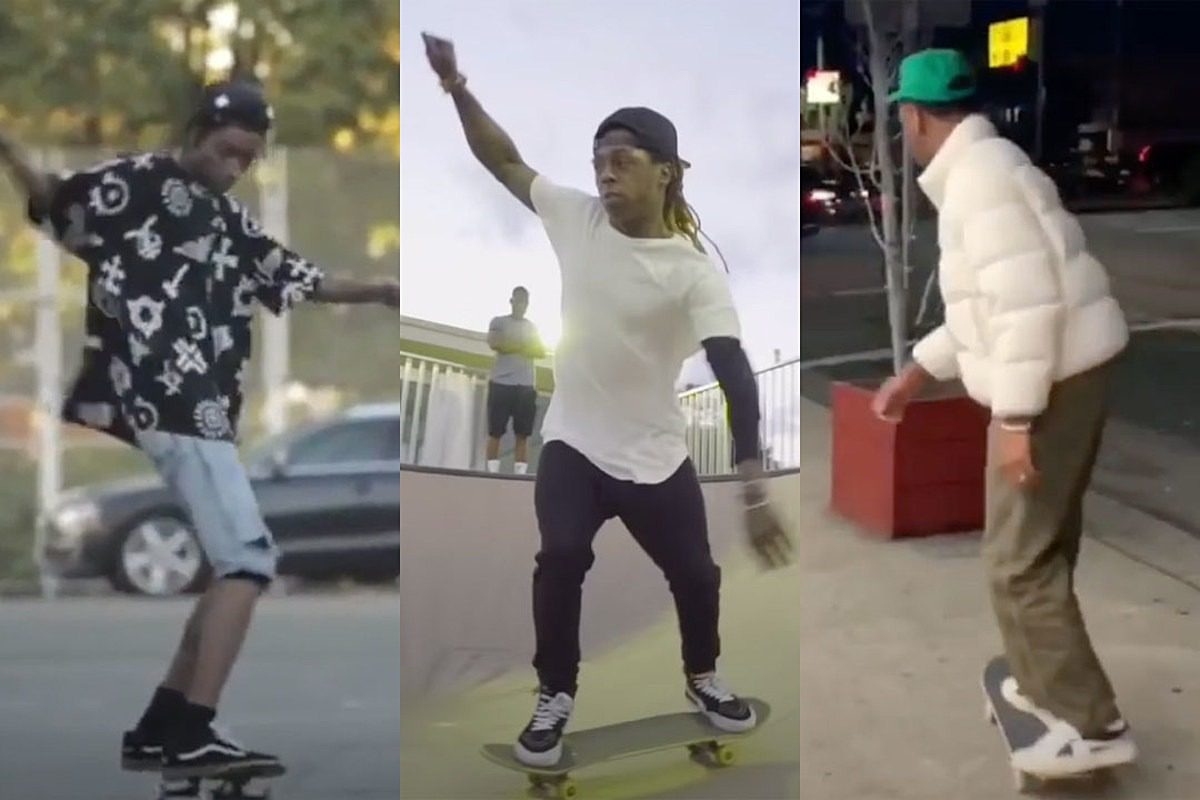 From Lupe Fiasco to Beastie Boys, rappers have paid homage to skateboarding both in their lyrics and on the streets. Wiz Khalifa, Lil Wayne and Tyler, The Creator have also showcased their talents when it comes to skating over the years.

When the strings swell and Lupe Fiasco's voice comes through on his 2006 hit "Kick, Push," a skater's love for the board emerges on the four-minute track. Lupe paints a picture about a kid's love for hitting the park after dark. "He was banished to the park/Started in the morning, wouldn't stop ’til after dark, yeah/When they said, 'It's getting late in here/So I'm sorry, young man, there's no skating here,'" he raps on the Soundtrakk-crafted beat.

Lupe inadvertently created an anthem for skateboarders everywhere. The catchy "kick, push, coast" resonated with thrashers on a literal and metaphorical level. But before Lupe, there were Beastie Boys. Their debut album, Licensed to III, was one of the earliest displays of hip-hop combined with elements of rock music. The 13-track LP consistently meshed the best parts of two hardcore genres to satisfy fans. With the music came the personal side to the group as well, one that showcased their interest in skateboarding. Their videos often paid homage to the sport, like in the visual for “Looking Down the Barrel of a Gun,” from their 1989 album, Paul's Boutique. And they even appeared on MTV Sports showing how they skate on tour—with pads so they don't get hurt.

These days, hip-hop's love for skateboard culture has grown even more. In 2011, Lil Wayne started seriously skateboarding. He got inspired by watching skateboarding phenom Alex Midler doing tricks years ago. Now, Weezy is pretty nice with his own skating talents, and has even built a private skatepark at his home in Miami. "Skating is very therapeutic for me because I don't have to think about nothing else but what I'm doing," the rapper shared in a 2017 ESPN interview. "When I'm trying to land a trick, that's the most important thing to me, period. Don't come at me talking about no song. I don't want to talk about no music. What do I have to do with me feet? When should I pop?"

Tyler, The Creator has admitted he "sucks" when it comes to skateboarding, but the many videos circulating the internet prove otherwise. He's got skills. His favorite trick at one point was a fake half cab heel, and professional skateboarder Eric Koston is among his favorites.

Madeintyo, whose been skating for years at this point, showed love for the craft and a legend on his 2016 song "Skateboard P," which pays tribute to Pharrell Williams and the nickname given to the producer in high school because of his brother, Cato, a fellow skater.

Wiz Khalifa has taken up skateboarding throughout his rap career as a fun activity. He's been seen showing off his skills alongside other rappers, in clips across social media and even in his 2015 “Lit" video.

In honor of the annual holiday that is Go Skateboarding Day, which is celebrated this month on June 21. Check out some of your favorite rappers skateboarding below. From Wiz to Weezy, Tyler, The Creator and even Future, they all ride in their own way.