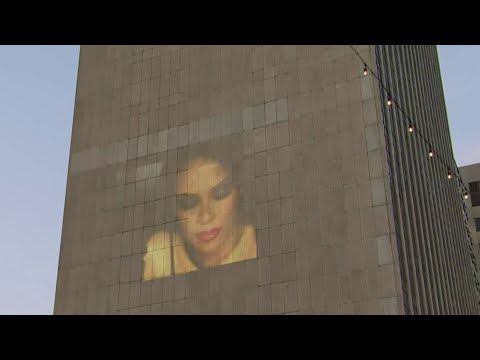 Aaliyah Haughton, 22, was tragically killed in a plane crash on August 25, 2001. Twenty years later, fans of the Detroit-raised R&B/Hip Hop legend are still celebrating her life, legacy, and music.

Blackground Records 2.0 partnered with EMPIRE to curate worldwide wall projections in honor of Aaliyah. The campaign kicked off last night at 8:30 pm in the late “Are You That Somebody?” hitmaker’s hometown.

Detroit will host the Aaliyah projections through today (August 26). Rochelle Riley, Director of Arts and Culture for the City of Detroit, was involved in presenting the special tribute to the Brooklyn-born singer/actress.

The projected sightings campaign will also take place at sundown in the other major American locales of Miami, New York City, Los Angeles, Atlanta, and Chicago. International markets will include London, Berlin, and Amsterdam in Europe.

“On this day 20 years ago, our worlds were completely shattered when we learned that Aaliyah was no longer with us. Life would never be the same,” reads a statement from Blackground Records 2.0 dated August 25, 2021.

The Barry Hankerson-founded label continued, “Aaliyah was a light. A sweet and genuine soul that was such an inspiration to us all. Thank you so much to all of Aaliyah’s fans who continue to keep her legacy alive and inspire people around the world. She will forever be in our hearts.”

In addition to the global projections, Blackground Records 2.0 also recently added Aaliyah’s sophomore album One In A Million to streaming services for the first time. The 1996 studio LP is expected to jump into the Billboard 200 chart’s Top 10 region next week.