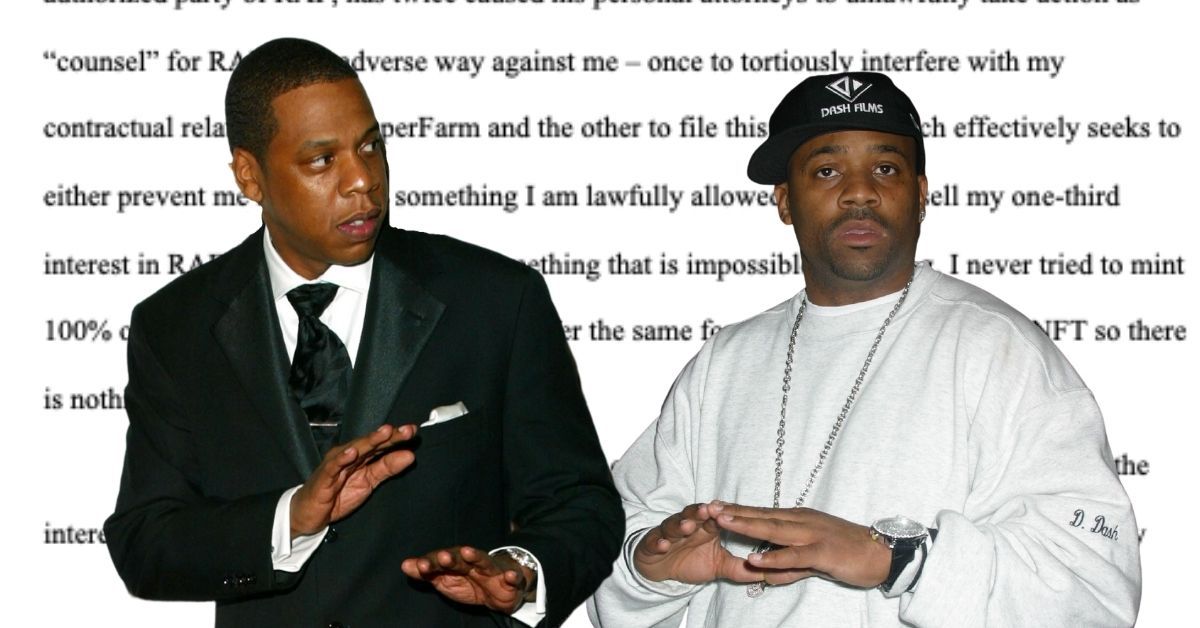 Damon Dash is ready for war with Jay-Z over the album Reasonable Doubt and he’s calling BS on a lawsuit filed by his estranged business partner in Roc-A-Fella Records earlier this week.

Damon blasted Jay-Z 25 years to the day (June 25, 1996) Reasonable Doubt was released in a high-stakes battle over the album.

On June 22, Jay-Z’s lawyer Alex Spiro of the law firm Quinn Emmanuel obtained a temporary restraining order against Damon Dash, preventing him from minting Reasonable Doubt as an NFT for sale.

In a court hearing earlier this week, Spiro claimed Damon was attempting to mint the album as an NFT for sale through a company called SuperFarm, in hopes of raking in $30 million in proceeds.

As proof, Jay’s lawyer presented Judge John Cronan with a copy of an unreleased press release as proof that Damon was illegally attempting to enrich himself at Roc-A-Fella’s expense, by auctioning off his interest in the copyright to Reasonable Doubt.

Damon has publicly denied the allegations, claiming he has been attempting to sell his 1/3 interest in Roc-a-Fella Records, which owns the rights to Reasonable Doubt.

Today, Damon Dash has formally called out Jay-Z in court in his response to the lawsuit.

Damon Dash accused his former business partner of violating the copyrights to the album as well, with his upcoming auction of the artwork of Reasonable Doubt on Sotheby’s slated for this July.

First off, Damon is asking Alex Spiro and the law firm of Quinn Emmanuel to be barred from representing Roc-A-Fella in the lawsuit, claiming there is a conflict of interest since Alex Spiro is Jay-Z’s lawyer and not the legal counsel for the iconic record label.

Damon Dash says Jay-Z and Alex Spiro had no legal authority to send a cease and desist letter on behalf of Roc-A-Fella, since Damon is still the initial and sole director and CEO/President of Roc-A-Fella, while Jay-Z and Kareem “Biggs” Burke are simply shareholders, who have never been appointed as an “officer, director or otherwise authorized party” to enter into contracts on behalf of the label.

Damon says Jay-Z is simply an artist and shareholder signed to the corporation, which owns the rights to Reasonable Doubt.

Damon maintains that as an undisputed 1/3 shareholder and Roc-A-Fella, he can sell, and/or transfer his shares without interference from the other shareholders in the label.

Damon says in March of 2020, he wanted to sell his interest in Roc-A-Fella Records and Jay-Z attempted to purchase the interest, but Damon Dash refused his lowball offer.

Damon claims Jay-Z was extremely upset because the rapper owns all the copyrights to all of his albums – except for Reasonable Doubt.

Damon says he never planned to sell the album as an NFT.

Instead, Damon said he was attempting to “mint a hologram,” which in turn would be a digital representation of his 1/3 interest in Roc-A-Fella, but he did not elaborate on the plan.

According to Damon, for reasons unknown, SuperFarm’s internal memos were somehow leaked, resulting in Jay-Z’s attorney Alex Spiro sending the cease and desist letter, claiming they were counsel for Roc-A-Fella Records.

“By my count, Jay-Z with knowledge that he is not a director, officer or otherwise authorized party of RAF, has twice caused his personal attorneys to unlawfully take action as ‘counsel’ for RAF in an adverse way against me – once to tortiously interfere with my contractual relations with SuperFarm and the other to file this lawsuit, which effectively seeks to either prevent me from doing something I am lawfully allowed to do (so my 1/3 interest in RAF) or compel me to do something that is impossible (I never minted any NFT so there’s nothing to turnover). – Damon Dash.

Damon said Jay-Z is “desperate” and “frantically” trying to get his 1/3 interest in Roc-A-Fella Records. He maintains he is allowed to sell his 1/3 to “whoever, by any means and for whatever price.”

Damon Dash also says that on June 22nd, Jay-Z called a special Board of Directors Meeting, where he attempted to appoint himself as temporary director of Roc-A-Fella Records in a meeting which he labeled a “sham.”

Damon Dash says Jay-Z has caused him millions of dollars in damages by filing the lawsuit, yet he is selling his own NFT’s using Reasonable Doubt promotional material with Sotheby’s, which also infringes on Roc-A-Fella Records’ copyright to the album.