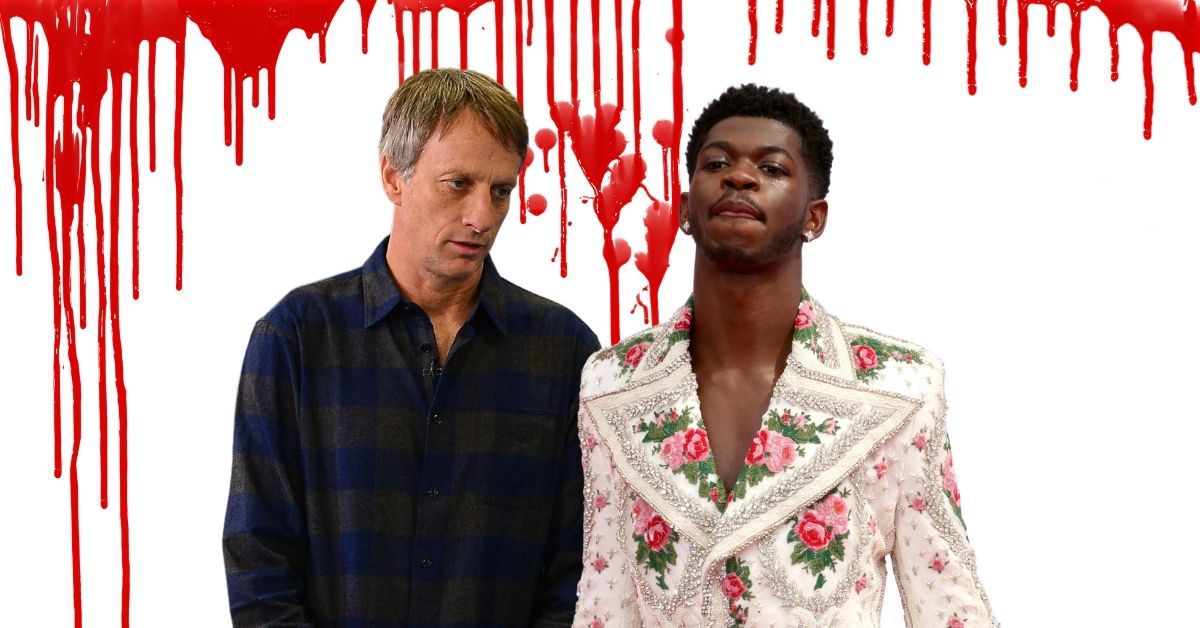 Lil Nas X was angry over the outrage directed towards him when he decided to make his “Satan Sneakers” that contained human blood in the soles.

The sneakers, which reimagined a pair of Nike Air Max 97s, were done in collaboration with the company called MSCHF complete with pentagons, as well as a quote from a Bible verse in a nod to the devil.

Nike got wind of the unauthorized collaboration and sued MSCHF and Lil Nas X. They ultimately agreed to stop selling the Satan Sneakers.

So, when Lil Nas X found out Tony Hawk was selling a “Blood Deck” board he took to social media to express his opinion that there was a double standard at play.

The rapper implied the lawsuit came about because he is a gay black man.

Shortly after Lil Nas X tweeted his dissatisfaction, he also replied to a comment about Tony Hawk on Instagram with the phrase “nah he tweakin.”

For some reason, an army of bots took over Instagram and flooded thousands of accounts with the term “nah he tweakin.”

Yesterday, Tony Hawk held a ribbon-cutting ceremony for his Blood Deck board, where he addressed Lil Nas X.

“I understand his perspective, and I respect it. Yeah, obviously there’s a disparity there, but I think the issue with him more was that there was a copyright infringement, from what I understand,” Tony Hawk told KSL.com. “But by no means was I trying to capitalize on his success or even copy him.”

According to Tony Hawk, he was inspired by a rock band that was popular way before Lil Nas X was even born – KISS.

The band’s bass guitarist Gene Simmons is well known for spitting blood and fire as part of the legendary rock band’s stage gimmick.

In 1977, the band teamed up with Stan Lee and Marvel Comics. The band members mixed their blood with red ink for a limited edition issue titled “A Marvel Comics Super Special!: Kiss”

According to Tony Hawk, this is where the inspiration for his Blood Deck board with a company called Liquid Death came from, not Lil Nas X.

“It came from Kiss. Kiss did a thing in the ’70s where they put their blood into ink used in a comic book, and I was a Kiss fan. I was alive when it came out. I wanted one so badly, but they were obviously snatched up,” Tony Hawk revealed. “So when Liquid Death asked me about doing a collaboration, I thought about that, and thought, ‘Well, I’ve given enough blood in skateboarding, why not just add some to the paint?'” Hawk said.

As for the “nah he tweakin’ phenomenon, Instagram made an statement, claiming they have finally gotten the bots under control.

Instagram Comms
@InstagramComms
Today some people experienced trouble loading comments on Instagram (except, it appears, for “nah he tweakin” 🧐). We’ve resolved this issue and all comments should now be back.