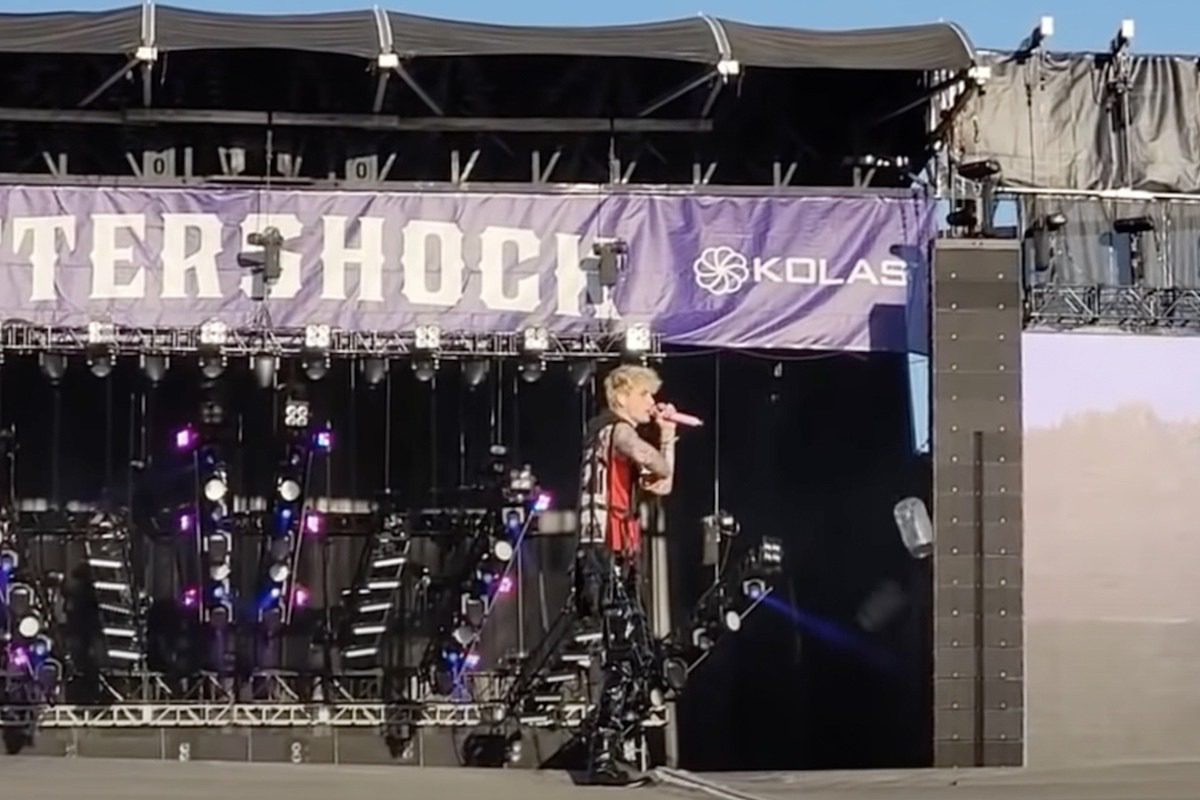 Machine Gun Kelly is still feeling the wrath from Slipknot fans who recently threw bottles and tree branches at him during his performance at the Aftershock Festival.

In a report from Heavy Consequence on Tuesday (Oct. 12), MGK was performing at the Aftershock Festival last Saturday (Oct. 9) in Sacramento, Calif. when he was pelted with bottles and tree branches while climbing up a tent in the middle of the crowd. You can watch a video of the incident at the bottom of this post.

In the clip, a bottle is being hurled at the rap-rocker, then a thick tree limb and a plastic Coke bottle. MGK seemed unfazed by it all as he climbed back down from the tent.

According to the website, the "Papercuts" artist was garnering boos and jeers from the crowd from the beginning of his set.

"How the fuck you feelin' Aftershock?" he reportedly asked the crowd. "Mixed opinions. I love you so much. This morning I was like, 'Do we get on the plane and go to this?' I was sitting there thinking about the last festival we did where this 10-year-old got her poster ripped up just for liking me. I'm doing this show for her and everyone who came to see us."

Kelly’s moment of self-reflection might be from his newly-minted feud with veteran metal band Slipknot. Last month, MGK dissed the group during his set at the Riot Festival in Chicago. An event where both MGK and the rock band performed.

Upon hearing his remarks, Slipknot fans jumped on social media and dragged MGK endlessly. Some fans were even urging Slipknot to team up with Kelly’s other arch nemesis—Eminem—and drop a diss song about him.

After getting dragged, Kelly issued an explanation for his Slipknot diss, which was more aimed at Slipknot vocalist Corey Taylor and his disapproval of a verse that he sent in for his now-released rock album, Tickets to My Downfall.

Last month, Machine Gun Kelly had to push back on reports that he was getting booed at the Louder Than Life Festival in Louisville, Ky. The Ohio-bred artist hopped on Twitter and retweeted a fan's video that shows fans singing along to his set.

See Every XXL Freshman Cover Since 2007

A look at every XXL Freshman cover since 2007.
Industry Stories - by admin