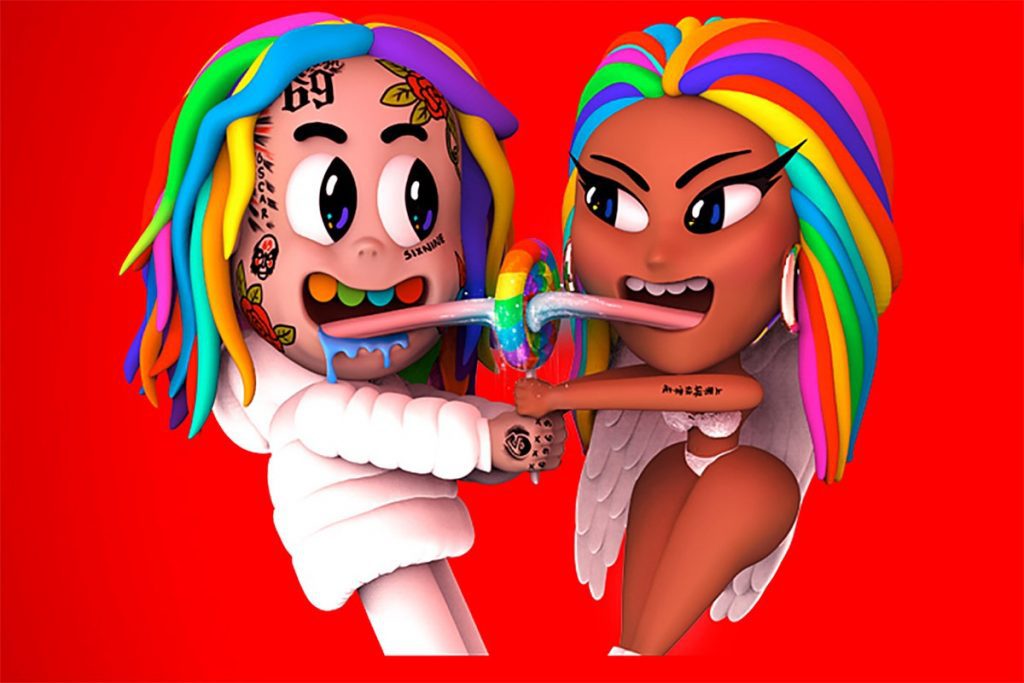 It's official. 6ix9ine has teamed up with Nicki Minaj once again for his second single since being released from prison months early due to coronavirus concerns.

On Wednesday (June 10), Nicki confirmed that she and Tekashi are dropping a new track called "Trollz" at the end of the week. This morning, images of brightly colored merchandise promoting Nicki and 6ix9ine's new single began to circulate on social media after both rappers' webstores unveiled clothing, cassette, vinyl and digital versions of the record.

Jackets run for $85, a "Trollz" CD plus a digital single is $6, "Trollz" shark pants are $70 and more merch can be copped at nickiminajqueen.com.

Hits Daily Double then tweeted that 6ix9ine's new single "Trollz" will be released on Friday (June 12). "#TROLLZ by @6ix9ine and @NICKIMINAJ drops this Friday," the post reads.

Shortly after, Nicki officially announced on Instagram that the single while also sharing details about how the record will contribute to social injustice efforts. The Queens, N.Y. native said that a portion of the proceeds will be going to the Bail Project Inc., a program that provides free bail assistance to low-income individuals, who are unable to pay their bail as they await trial.

"A portion of the proceeds from #Trollz including merch items, will be going directly to The Bail Project Inc.," she wrote in the Instagram post." "The fund provides free bail assistance to low-income individuals who can’t afford to pay bail while awaiting their trial. We want to protect and support the thousands of brave people working on the front lines of social justice, using their voices to demand AN END to the targeting and killing of Black Americans by the police."

"Trollz" follows Nicki's song "Yikes," which dropped in February, and is the second single to be unleashed by the 6ix9ine since he was released from prison and into home confinement in April. In early May, Tekashi gave fans "Gooba," but it wasn't long before he promised another track was on the way and reports claimed it would be another single featuring Mrs. Petty.

After teasing something was on the horizon, the song was delayed due to scheduling. It was postponed again last week to stand in solidarity with the Black Lives Matter movement and the murder of George Floyd, an unarmed Black man who was suffocated by former Minneapolis, Minn. police officer Derek Chauvin while being detained, and the many other victims of police brutality.

"Trollz" is not the first time Nicki and 6ix9ine have worked together. In 2018, before the "Bebe" rapper was taken into federal custody, the two New York rappers released "Fefe," which peaked at No. 3 after spending 20 weeks on the Billboard Hot 100 chart.