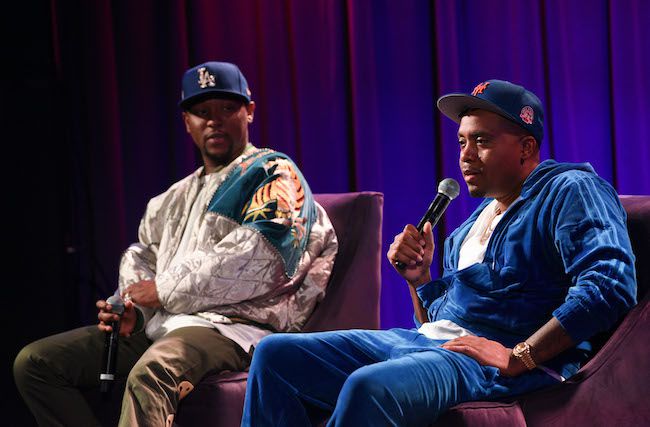 As part of an ongoing relationship with the Los Angeles, California-based GRAMMY Museum, AllHipHop was invited to attend a recent discussion with Nas and Hit-Boy.

Located at LA Live in the heart of downtown Los Angeles, The GRAMMY Museum and Culture Impact Agency gave fans an unprecedented look at how Nas and Hit-Boy have a one-of-a-kind synergy.

The conversation also revealed how the pair broke barriers as the premier rapper/producer duo in Hip-Hop.

On Tuesday (October 19th), the GRAMMY Museum hosted an interactive discussion hosted by Billboard Hip-Hop Editor Carl Lamarre. During the intimate conversation, both Nas and Hit-Boy gave fans a chance to ask questions about their music and prolific chemistry, which earned them a GRAMMY Award in 2020 for their collaborative effort King’s Disease.

While discussing their chemistry and the process of creating music together, Nas and Hit-Boy revealed how it was the lauded and elusive Frank Ocean who brought them together nearly seven years ago.

While Nas recalled the Hit-Boy produced song “Royalty” (featuring RaVaughn) off his Lost Tapes 2 album, Hit-Boy revealed they were introduced via a Frank Ocean collaboration.

“We linked up years ago, probably like seven years ago,” Nas explained. “So we was already kind of like talking about working, I would see him, and we was going through stuff. And so we was already trying to work, and years just went by. And I was just like, man, I had this song on Lost Tapes 2, and he [Hitboy] produced it. But I hadn’t seen him. Somebody from his team sent me the beat. I can’t remember how I got it. It was on Lost Tapes 2.”

At that point, Hit-Boy interjected and said, “We got it from Frank Ocean. I did the song with Frank and sent it to you.”

As Nas continued after the fans cheered for Frank Ocean, he explained how the song with Frank Ocean was for his controversial Untitled album, which was initially titled N#####.

“He did the song with Frank, and I got it from him. I still don’t know how I got it from him – we was in the same studio or something,” Nas continued. “So I had the song, and then it was supposed to be on the Untitled album. So the lyrics are kind of racy that Frank was singing. And I think he didn’t want to go that route anymore because it was a little bit, you know, I’m saying strong lyrics, like, politically strong. So we didn’t do it; we didn’t go that far with it. But we did move on and take the singing on it. And so I just know if I get with him [Hit-Boy], it’s gonna be on.

“Turns out we in LA same time. I’m working in a studio, Hit like sends word to Double, everybody around like yo….Double sends me word, ‘Yo Hit-Boy says, ‘when you coming to the studio?'” I said, ‘Hit-Boy said that? I’ll be there tomorrow,'” Nas said.

The two continued to explain how Nas initially wanted to do a Valentine’s Day album with Hit-Boy, but the energy was more than that and yielded “Replace Me” featuring hook extraordinaire Don Toliver and “All Bad” featuring funk master Anderson Pak.

“He wanted to do like a Valentine’s Day album, just like, like four or five love songs to put out. So look, I don’t know if y’all are familiar with KD1, but the song ‘Replace Me’ with Don Toliver and ‘All Bad’ with Anderson .Paak. That was the first song that we did, ‘All Bad’ with Anderson .Paak, and so that was the original energy. We wasn’t even trying to take his off how we did, essentially, but it just happened.”

Check back for more on this GRAMMY Museum discussion with Nas and Hit-Boy in the coming weeks.